Our corporate media cousins are up to their usual tricks in this AP “story” by Jennifer Loven that appeared over the weekend (why at least the qualifier “analysis” wasn’t stuck in here somewhere is a mystery to me – this reminds me a bit of this Atrios post today about how those all-knowing fonts of wise discourse, or so they would have us believe, are already trying to concoct their narratives on Obama before he’s even sworn in)…

WASHINGTON (AP) _ For all Barack Obama's talk about change, there are signs that in style — if not substance — a new White House under Democrat Obama would operate much like the current one under President Bush.

Think discipline, efficiency and secrecy. These are hallmarks of Obama's campaign, just as they have been for the last eight years in the leak-proof, tightly managed Bush administration.

Aides are expected to be both tightlipped and tight-knit. They get a "no drama" speech upon hire. And even if that rule is violated, histrionic disagreements over strategy, policy or personality are expected to stay behind closed doors, and they actually do. Most events come off like clockwork.

Obama's style as a candidate predicts a CEO-style president, one who delegates rather than micromanages.

It's the same model as for Bush, the nation's first MBA president. It derives in part from something the two men have in common: natural political gifts that set them on a path to the White House that took shortcuts around much government experience. That means policy experts are needed for heavy lifting.

Spare me (and gosh, such thorough sourcing for these claims!).

What “shortcut” did Obama take when he was graduated from Columbia University and Harvard Law School, where he served as president of the Harvard Law Review, as noted here?

Any “shortcuts” when he directed Illinois' Project Vote from April to October 1992, a voter registration drive with a staff of ten and seven hundred volunteers, which achieved its goal of registering 150,000 of 400,000 unregistered African-Americans in the state, and led to Crain's Chicago Business naming Obama to its 1993 list of "40 under Forty" powers to be?

And I never found a “shortcut” when, in July 2004, Obama wrote and delivered the keynote address at the 2004 Democratic National Convention in Boston, Massachusetts, which electrified the country (of course, John Kerry was unable to capitalize on that for a variety of reasons). 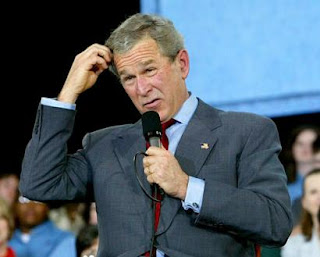 Dubya, on the other hand, served as a bumbling presence on the audit committee of Harken Energy (here), a figurehead owner for a baseball team (here), a ceremonial governor of Texas (here), and perhaps the worst president this country has seen in nearly a century (here - I know this stuff is, sadly, engrained into our collective memory, but it bears repeating).

But to take a trip back in time and see just how thoroughly our fourth estate stenographers utterly fawned over Commander Codpiece, take a look at this story in USA Today published shortly after the beginning of Iraq War II in March 2003, particularly the following…

It was time for some reassuring words from the commander in chief, Bush and his aides decided.

Bush, who had just returned from Camp David, said "good progress" was being made. Then came a bleak warning: "This is just the beginning of a tough fight." To address concerns that he might have been out of touch while away from the White House, he mentioned that he is "constantly briefed."

He said Saddam Hussein "is losing control of his country." Finally, Bush said he expects prisoners of war to be treated humanely and warned their captors that they could be tried as war criminals if they don't comply.

Bush's investment of 10 minutes on a balmy afternoon ensured that his words were part of the day's biggest stories. His appearance was meant to spotlight his optimism that the war will be won and to highlight his place at the epicenter of the action. His words were limited to increase the odds that the news media would emphasize his key messages. It's known as "message discipline." Other administrations have done the same thing, but analysts say the Bush team is particularly good at it.

Kathleen Hall Jamieson, dean of the Annenberg School for Communication at the University of Pennsylvania, says Bush's absences from public view mean that when he does speak, Americans "take it as a very, very important moment."

The story goes on to note other occasions where Dubya just sort of popped up to proclaim victory is within reach, Terra! Terra! Terra!, “coalition of the willing” (remember them?) and then retreat out of the reach of cameras and microphones, often taking no questions before he did so. And of course, this was considered to be nothing more than “message discipline,” as noted above, not the potentially dangerous antics of an individual completely unsuited for the job by virtue of experience, presence, or temperament.

And as we eventually learned, this indeed was all scripted, as Frank Rich reminded us yesterday in his column about the McBush/Dubya bond, though for a very different reason than the one originally advertised at the time (here)…

The Bushian ethos that (John) McCain embraced, as codified by Karl Rove, is larger than any particular vote or policy. Indeed, by definition that ethos is opposed to the entire idea of policy. The whole point of the Bush-Rove way of doing business is that principles, coherent governance and even ideology must always be sacrificed for political expediency, no matter the cost to the public good.

Like McCain now, Bush campaigned in 2000 as a practical problem-solver who could “work across the partisan divide,” as he put it in his first debate with Al Gore. He had no strong views on any domestic or foreign issue, except taxes and education. Only after he entered the White House did we learn his sole passion: getting and keeping power. That imperative, not the country, would always come first.

One journalist who detected this modus operandi early was Ron Suskind, who, writing for Esquire in January 2003, induced John DiIulio, the disillusioned chief of the White House Office of Faith-Based and Community Initiatives, to tell all. “There is no precedent in any modern White House for what is going on in this one: a complete lack of a policy apparatus,” DiIulio said. “What you’ve got is everything — and I mean everything — being run by the political arm. It’s the reign of the Mayberry Machiavellis.”

If politics strongarm everything, you end up with the rampant cronyism, nonexistent long-term planning and abrupt, partisan policy improvisations that fed the calamities of Iraq, Katrina and the economic meltdown. Incredibly, McCain has nakedly endorsed the Bush-Rove brand of governance in his own campaign by assembling his personal set of lobbyist cronies and Rove operatives to run it. They have not only entangled him in a welter of conflicts of interest, but they’ve furthered cynical political stunts like the elevation of Sarah Palin. At least Bush and Rove didn’t try to put an unqualified hack like, say, Alberto Gonzales half a heartbeat away from the presidency.

As opposed to Barack Obama, who has put Joe Biden in a position where, God forbid, Biden could step into the job in the event that something catastrophic happened.

I also found Loven’s remark about “heavy lifting” to be hilarious. Obama has mastered the art of negotiation to craft legislation pertaining to sometimes arcane policy matters; Dubya, on the other hand, has always presented himself as someone who gets “arcane” on matters about as complicated as a Bazooka Joe bubble gum cartoon.

And for added emphasis, we have Obama here quite rightly calling the ruinous Bushco reign “catastrophic”; yes, I know there’s some political posturing going on, but my point is that it’s absolutely ridiculous, to say nothing of patently untrue, to assign some causal relationship of any kind between Obama and Dubya where none exists, while on the other hand, you have the nominee of Dubya’s own party trying to distance himself from the failed legacy of his commander-in-chief, though doing so ineptly, as the voters of this country have largely come to realize by now.
Posted by doomsy at 9:35 AM