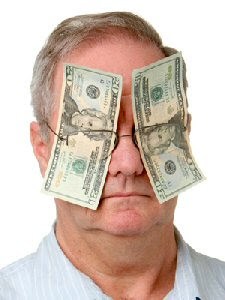 Today brings us the following from “that straight-talking maverick”…

John McCain's campaign is seizing on Barack Obama’s comments Tuesday night deriding the public financing system for presidential campaigns. A senior McCain adviser calls it the latest signal that the Democratic candidate may abandon a promise to participate in the system, should he become the Democratic nominee.

Well, that's about par for the course from the Repugs, I know.

Last week, McCain's campaign returned $3 million in funds received from major donors towards general election expenses, and encouraged them to send the money to the Republican National Committee's Victory Fund instead — one of the strongest signals to date he intends to participate in the public financing system, which prohibits him from receiving those donations from individuals who have already contributed the $2,300 primary season maximum.

I have news for you, Dana, based on this; McCain already is participating in the public financing system!

Oh, and while you’re at it, try asking the Senator when he plans to release his tax returns, will you?
Posted by doomsy at 3:53 PM