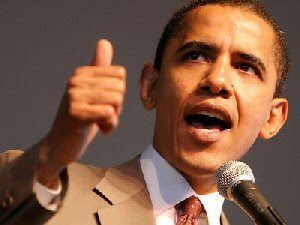 Thanks to Hillary Clinton’s continued parsing of Republican Party talking points, the supposed issue of Barack Obama’s view of small-town America continues to play out in our corporate media; as I noted last night, that was the lead in the story of the “Faith Forum” in Harrisburg last night instead of the fact that John W. McBush didn’t even bother to show up.

Today, though, we learn the following from here…

In the wake of the uproar following Barack Obama's comments about how some voters "get bitter" and "cling to guns or religion or antipathy to people who aren't like them or anti-immigrant sentiment or anti-trade sentiment as a way to explain their frustrations," the Obama campaign has released a so-called "robo-call" featuring York, Pennsylvania mayor John Brenner. In the call, Brenner defends Obama and says "he's got it right."

"Barack Obama understands us," Brenner says. "He's got it right, we are frustrated -- frustrated with polices that enable businesses to leave our community, pensions to be stripped, health care benefits to be taken away and homes foreclosed. Unlike his opponents, who have been part of the Washington establishment that are out of touch with us, Barack Obama will change Washington. It is policies that hurt us. He will take on the special interests and fight for us."

And not to be outdone, “Kristol Mess” piles on accordingly in the New York Times today (pathetic that this man even has a job with these people). However, in the process of selectively quoting Obama and trying to attach some nonexistent meanings to what Obama said, K.M. doesn’t mention the quote in the speech about “anti-immigrant sentiment” in Hazelton, Pa. in particular (I mean, of course K.M. doesn’t, because that would mean acknowledging the fact that Obama is actually right).

Update: Nice one by BarbinMD here...

Also, I think it’s instructive to note the following concerning the Clinton and Obama campaigns; when HRC’s campaign is in spin mode, we are likely to hear from any one of a number of individuals (Phil Singer, Howard Wolfson, Mark Penn – who is still with the campaign, by the way – HRC’s husband, maybe Chelsea, or even Hillary herself), and what they say could be all over the place when it comes to either complementing Hillary or contradicting her.

When some kind of a media dustup involves Obama, you are likely to hear from the candidate himself about 90 percent of the time on the matter, or on the rare occasion when you hear from someone else involved with the campaign, that person is unequivocal in his support of Obama and leaves nothing open to interpretation (the only exception I can think of is the case when former aide Samantha Power called Hillary a “monster,” and afterwards, she left the campaign almost right away).

That tells me a lot (and a huge hat tip to The Daily Kos for this from Robert Reich; I haven't made it all the way through it yet, but this should be memorized by every political phony and pundit demagogue currently trying to pillory Obama over this utter distraction).