Condi And Gates Get “Check Mated” On Russian Reforms 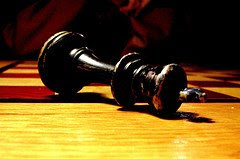 This Moscow Times story tells us that Secretary of State Condoleezza Rice and Defense Secretary Robert Gates met recently with some of the Kremlin’s political opposition, but did not meet with its most vocal opponents, notably chess legend Garry Kasparov.

Kind of makes you wonder how serious they truly are about encouraging democracy, doesn’t it? But then again, why should we be surpised?

"The opposition - from the left and the right - can never really challenge the regime through elections," Kasparov said in the interview seen by AFP (Kasparov called the March 2nd election in which Dmitry Medvedev replaced Vladimir Putin “meaningless”).

"Putin is putting the nails in the coffin of democracy," he added.

"If we don't stop them we can have a funeral for Russian democracy. They have been killing it for seven years, slowly poisoning it."

Kasparov said Bush has helped Putin, a former Soviet KGB officer, run roughshod over human rights and democracy by failing to step forward with criticism of his Russian counterpart.

"Putin is immune (from criticism) unless he hears a firm reaction from the top man," Kasparov said.

"He doesn't care about clerks, even (US Secretary of State) Condoleezza Rice. Only a message from the top counts."

But the US president "says nothing about most of the assaults on democracy in Russia," lamented Kasparov, who himself contemplated a run for the Russian presidency before abandoning it December in the face of harassment and ostracism.

"He says nothing to Putin and continues to do business with him."

The former chess champion, who entered politics in 2005, recalled a 2001 encounter in which Bush said he looked Putin "in the eyes" and saw someone he could rely on.

"Putin looked into Bush's eyes as well. He saw he could push Bush's limits. .... He pushes, and Bush does nothing," Kasparov concluded.

I understand that this award is not intended to be a beauty contest. But for all of Putin’s attacks on the West, this will be promoted widely within Russia and around the world as a victory and an endorsement by the West of Putin’s policies and practices of dictatorship. It’s an early Christmas present to the Kremlin when what they really deserved was a lump of coal.

I will add a brief response to Putin’s jibe in the TIME article about my speaking English to reporters after my arrest last month. First, I also spoke in Russian, which oddly enough never makes the Kremlin-controlled newscasts. Second, since opposition statements are almost completely banned in the Russian media the foreign press usually makes up 90% of attending media at opposition events. Lastly, I would be delighted to show Mr. Putin which of us speaks and writes better Russian. Perhaps he will accept my challenge to a debate on national television or allow an editorial of mine to appear in a major newspaper.

Looks like Kasparov and those who had the best chance of effecting reform got “rooked” by Bushco, sadly. Sorry to say that they’re not the first, and probably won’t be the last.
Posted by doomsy at 3:30 PM