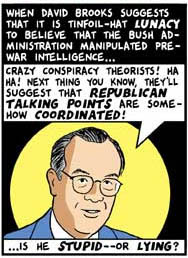 David Brooks of the New York Times continues to embellish the corporate media narrative that the campaigns of Democrats Hillary Clinton and Barack Obama for the presidential nomination are nothing more than the triumph of “identity politics,” which is pretty much defined as someone running for office to represent a group that has been actually oppressed in some fashion or merely perceived as having received that treatment (here).

This does at least three things, I realize. First, it keeps the “divided Democrats” theme lurking out there in the shadows of public consciousness somewhere, and second, by excluding John Edwards, it implies that white males have no place in the Democratic Party. Third (as always), it gives Brooks a launching point from which he can foist more misinformation on us.

This is not really news, I know. However, Brooks does go off on this right-wing riff that is really a doozy…

All the habits of verbal thuggery that have long been used against critics of affirmative action, like Ward Churchill and Thomas Sowell, and critics of the radical feminism, like Christina Hoff Summers, are now being turned inward by the Democratic front-runners.

I can understand how Brooks can use this column as an excuse to plug fellow freepers Hoff Summers (whose work is quite properly dissected here by Jennifer Pozner) and Thomas Sowell (likewise here and here)…but Ward Churchill??!! Mr. “little Eichmanns” himself?

I always thought Churchill was nothing more than a nut sheltered in academia who should be left alone to rant for his cloistered audiences, given as little exposure as possible to the outside world composed of actual grownups. The fact that the freepers made him a poster boy for their vitriol speaks volumes to both the shallowness of their arguments and their own intellectual bankruptcy.

And as you can read here, Churchill was an “affirmative action officer” at the University of Boulder in 1978 and received special treatment by some alleged status as a native American, nursing a grudge based on class oppression in consideration of that status, though the Rocky Mountain News reported in 2005 that Churchill had “no evidence of a single Indian ancestor.”

I have no evidence also to support a claim by Brooks or anyone else that Churchill opposed affirmative action, and even if I did, Churchill’s lack of credibility would automatically rule out any thought I’d have of citing him to support my argument.

And by the way, for more evidence of our august corporate media stoking this “Hillary/Obama brawl” for all it’s worth (jumping from "affirmative action" to the whole "raced-based politics" thing), here’s Michael Duffy, managing editor of Time, telling both sides to call Jim Wallis for a “feel good love in” of sorts that will of course be criticized also by Brooks and his ilk (Jim Wallis, who “knows their hearts well”; pardon me while I gag…and Duffy has some of his own issues that are noted here).

Now if you’ll excuse me, I’m going to take some Ibuprofen and go lie down in a dark corner somewhere (Atrios was right – the “silly season” is now a whole lot sillier).

One more thing: spank me and send me cryin' to my mama about Brooks' point at the very end about the Latino vote. He's absolutely right, though not just about the Dem nomination; they'll play a huge role in the general election in November.

(In a related vein, J.D. Mullane of the Bucks County Courier Times was shockingly sensible here; that can only mean a no-holds-barred hissy fit from him against Dems in general will be published shortly.)

Update 1/18/08: To be fair, I should note that BoBo clarified today that he was referring to Ward Connerly instead of Ward Churchill, though Connerly apparently has another whole set of issues - surprised?
Posted by doomsy at 9:23 AM