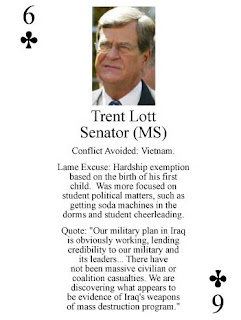 This excellent New York Times editorial by Timothy Egan (Times Select) tells the story of former U.S. House Repug J.D. Hayworth from Arizona who ranted and demagogued all over the place on the illegal immigration issue, so much so that he ended up getting voted out of office despite the power of 12 years of House incumbency.

The column went on to describe how the Repugs have been losing ground all over the place on this issue in the southwest in particular because of some of the truly looney-tune rhetoric about rounding up the illegals and kicking them out (as if that were even possible; commerce would grind to a halt in this country without them, and they've shown that they can organize and make noise on their own behalf - would that other groups that shared our interests did the same).

And just for good measure (and to totally validate Egan's sound argument), Lott compared the illegals to farm livestock here (can't blame talk radio for this one, however).

Aahhh, all of this is making me feel better and better about next year's elections. Thanks, Trent, ol' buddy.

Strom Thurmond would be so proud.
Posted by doomsy at 8:33 PM