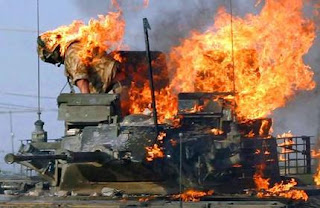 What does it tell you about the state of the Iraq carnage that our troops don’t even feel safe in their armored vehicles any more (as noted here)?

As noted in the story…

In the last three days, 15 U.S. soldiers have been killed in Iraq, nine of them in two powerful roadside bomb blasts. The military does not release the kind of weapon used in improvised explosive attacks, but the deadly nature of the two attacks suggests EFPs possibly were used in both.

The deaths brought the total number of U.S. troops killed in Iraq to 3,545, according to military reports. Hundreds of those soldiers have been killed by EFPs and other kinds of improvised explosive devices, known as IEDs. The Pentagon's most recent Iraq status report said EFP attacks were at an all-time high.

Foot patrols, of course, are not a fail-safe method. On city streets, snipers remain a real threat. And bombs can still kill dismounted soldiers. But when they go off in the middle of a foot patrol, causalities are generally lower because the soldiers are more spread out.

Before a foot patrol last week through a neighborhood next to Baghdad's Sadr City district, a private with the Alpha Company of the U.S. Army's 1st Battalion, 8th Calvary began complaining about having to walk. But EFPs have claimed the lives of several soldiers in the unit and Sgt. Leland Kidd, 28, of Gonzales, Texas, said the private should be thankful they were on foot.

"When I walk on my feet I don't have to worry about being blown up," Kidd told the private. "In the vehicle I have to."

But at least in the vehicles, the threat from snipers is reduced (and that includes someone in Baghdad known only as Juba The Sniper, according to this Stars and Stripes story, who may or may not exist or may be in fact more than one person).

As noted by Stars and Stripes, “Juba” is dismissed by Time correspondent Michael Ware as an Internet “urban legend,” and Capt. Brendan Hobbs, 31, of Tampa, Fla., commander of Company C, 2nd Battalion, 14th Infantry Regiment, said that the legend of Juba is “a product of the U.S. military” (scratching my head over that one, I’ll admit). However, given the number of fatalities we have suffered from marksmen hiding in the Iraq rubble, it wouldn’t be beyond credibility if “Juba” or some such individual or group of people actually existed.

I tried to find out how many of our service people are killed from bombs versus sniper fire, and the best I could find was this post which noted that 75 percent of our casualties come from explosive devices; that makes sense, but I didn’t see any corroboration for that statistic.

Here’s a thought; as long as Dubya, Petraeus and company are bound and determined to stick more of our fine service people into the Iraqi meat grinder, maybe we should send over the next back for “the surge” as part of an equine fighting force. As long as they can’t use the armor any more, at least it will be easier for them to beat it on horseback when they come under attack. And if nothing else, the manure from the animal could be used as a weapon if and when all else fails (aptly symbolic of this entire tragedy, I know).

And by the way, speaking of the "surge" and Petraeus, Dick Polman of the Inquirer wrote this nice post based on The Occupation of Iraq by Ali Allawi and the role Petraeus played in the billions squandered by the Iraqi Ministry of Defense.
Posted by doomsy at 9:46 AM