Where's Your Halo, Mikey (And Curt Too)

I wasn't going to say anything about this any more, but enough is enough.

The Bucks County Courier Times published another Guest Opinion this morning questioning Patrick Murphy's Catholicism, so now here is what I want to see in response.

If he and his supporters are going to "talk the talk," then they should "walk the walk" too.

And of course Arlen "Watch Me Gut The FISA Law" Specter showed up to fluff Mikey also...kindred spirits, I guess.

Also, the Courier Times reported that Fitzpatrick's chief of staff Mike "Watch Me Phone Into Patrick Murphy's Press Conference Call Without Authorization" Conallen once worked for Solutions North America, the lobbying firm run by Curt Weldon's daughter that is currently part of an FBI corruption probe (Conallen took a trip to Serbia for which he apparently repaid the firm $2,400 from his own funds in compliance with ethics rules). You can imagine what I think of Conallen, but to be fair, it doesn't look like there's anything there to investigate, though we'll see where this goes (and Carrie James of Patrick's campaign was smart not to comment on it). 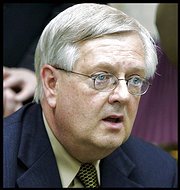 And speaking of Curt, Todd Mason gave a glowing account of what must have been a "furious" ("crazy" would probably be more appropriate) performance by Weldon in his last debate with Joe Sestak last night, with the Inquirer article harping on all of Sestak's real or alleged missteps, though the report does mention that Weldon was inundated by reporters' questions about the FBI probe (you KNOW Curt is in trouble when he trots out the "liberal bias" boogeyman).

Well, as Atrios and others mentioned yesterday, somehow I don't think Admiral Joe is going to be targeting the donors to Weldon's campaign for any kind of reprisals (every time you think Weldon can't go any lower, he finds a way to do it).

Finally, here is Admiral Joe's latest campaign ad (too good not to plug somehow - I'll try to embed it later)...

Update: Wow, read this to get an idea of what REALLY went on in the latest debate between Crazy Curt and Admiral Joe (and the Inquirer somehow ignored this...God almighty, what on earth is happening to that paper?).