Her Next Reality Show 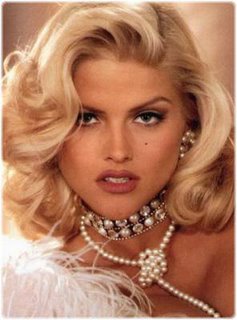 So let me get this straight, OK?

- It sounds to me like Bushco is trying to advocate granting more power to federal courts to rule in probate cases that, until now, had been the jurisdiction of state courts (another dramatic contradiction on the part of "the party of states rights," as far as I'm concerned). As pointed out in the story, Anna Nicole Smith lost in the Texas courts in her inheritance battle, but if the Supremes ends up giving more power to the federal courts, that will help her case (and I wonder if the Washington Post was trying to be cute when pointing out that Smith, a former porn star, was involved in a case that "could reach a climax"?)

- It also sounds like, in the process of doing this, Dubya is trying to stab another former "Skull And Bones Society" Yalie in the back (the deceased J. Howard Marshall II by name).

- Defending the jiggling, pulchritudinous (when her weight is OK) litigant can hardly be considered a sap to the "moral values" crowd.

So what other reason could Bushco possibly have for getting involved?

Easy. Maybe Dubya is actually reading this blog, and he's following my lead on "For The Love Of America" posted below.

(Either that, or I'm still delusional from my medication to even post on this...more probably the latter.)
Posted by doomsy at 9:27 PM