The Point Of The Surge? Anybody? 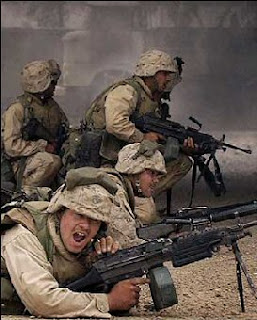 Wow, there are actually fewer roadside bombs killing our troops based on the August and September fatality totals according to this USA Today story!

So, does that mean that “the splurge” is working?

It must, right? I mean, Maj. Gen. Rick Lynch tells us that…

…he believed the decrease in rocket and mortar attacks would hold because of what he called a "groundswell" of support from regular Iraqis. "If we didn't have so many people coming forward to help, I'd think this is a flash in the pan. But that's just not the case," Lynch said.

And as we know, Lynch is completely trustworthy (I don’t enjoy calling out someone in our military like this, but if it looks like garbage and smells like garbage…).

But again, I thought the point of the surge was for the Iraqi “government” to get its act together, though David Corn tells us here that the government of Iraqi Prime Minister Nouri al-Maliki is not about to do that…

If the Maliki government is too corrupt to bring freedom and democracy to Iraq -- and political reconciliation is an illusion -- can we in good conscience continue to ask our troops to risk their lives and our taxpayers to invest hundreds of billions of dollars in this war?

And as Corn tells us, Dubya and the rest of Bushco have no interest in trying to answer that question.

And Brandon Friedman had a good post on this subject here.

Update: All Hail The Surge - ka-chiing!
Posted by doomsy at 1:07 PM

So all those diplomats that don't want to go to Iraq didn't hear the words about "Progress" in Iraq....of how the surge is working? Of how John McCain and Lindsay Graham can walk down the street in Baghdad and shop?

Yeah, you just hit on something over which I'm kind of torn, I have to admit, and I'm pretty sure I said something about this previously.

The diplomats should have protested earlier when their butts weren't on the line, but on the other hand, they have to feed their families also. Still, someone is going to REALLY have to make the case to me that I should be more sympathetic to them.

That being said, though, Max Boot wrote a really long Op-Ed in the Times today which basically told the diplomats to shut up and tow the line, so that automatically makes me a bit more sympathetic to them again (just another wishy washy liberal at times, I guess).