Not Smirking Now, Are You? 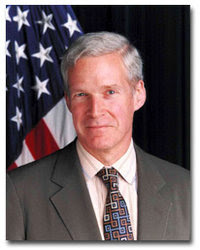 This Inquirer story (staying with them for now) tells us that Mark Everson is out as head of the Red Cross because, according to the report, he (a married father of two) was having a “personal relationship with a female subordinate.”

Far be it for me to delight in someone else’s misfortune, and I don’t intend to do that here. Also, I realize that you can’t properly measure someone’s management skills after only six months on a job (not usually anyway).

But Everson came from the IRS, where he froze more than 120,000 low-income taxpayers' refunds on suspicion of fraud without notifying the taxpayers or giving them a chance to respond (here), privatized tax collection and tried to allow third parties to have access to our tax information (here), and eliminated the highly-convenient and inexpensive (versus filling in paper forms and mailing them) TeleFile program for filing tax returns (here).

I hope he is able to get his life back together with his family to some degree. Afterwards, he should apply for a job as a mid-level manager for a retail franchise and take another crack at that “giving good consumer service” thing.

And by the way (just noticed this), in another Bushco departure (that turnstile just keeps spinning, doesn't it?), Alan Hubbard, former head of the National Economic Council, has called it quits here (I hope he at least bothered to learn the size of the national debt before he departed).
Posted by doomsy at 1:25 PM

This cretin was appointed to his IRS position by Bush, enough said.

I'm not as compassionate as you, I hope he suffers.

Tough call, I know, especially because matters involving the IRS are personal to me for reasons I may explain one day (I think it got into it awhile back, though, but I'm not sure...have to check).

I hear you, and I'm sure he will, but I just feel like I have to draw the line on some things, that's all.

I have compassion for old line Republicans, the kind you hardly see anymore, like Luger, Hagel, Grassely, Collins, etc. I disagree with them, wouldn't vote for them, but I don't have ill will toward them. But the Bush Republicans, well, I hope they all get leprosy.