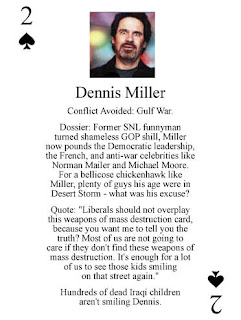 It seems that former Philadelphia Eagles quarterback and ESPN football analyst Ron Jaworski is going to replace Joe Theismann on the "Monday Night Football" telecasts this year (Jaws is a motor mouth too, but at least has a sense of humor about it).

With this in mind, the Inquirer conducted a readers' poll of their most favorite Monday Night Football analysts (I guess the requirement is that this person cannot be active; that's the only way John Madden would be omitted and not winning in a rout, actually), and as you might expect, Howard Cosell won by a large margin, which I guess is fair.

The only reason why I care about this, though, is to point out that conservative shill Dennis Miller, who once took up space in that role, came in dead last in the polling, as you can see below... 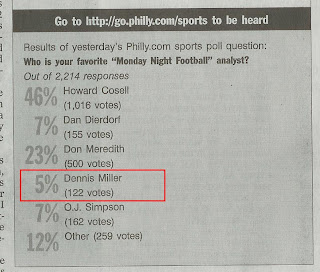 This really isn't too much of a surprise I know when you consider that he was the only MNF analyst to whom ESPN devoted a space at its web site on Tuesday mornings to explain what Miller was talking about the night before since it went over everyone's heads or was so vague as to defy understanding.

Also, Miller accomplished the extraordinary feat of coming in behind O.J. Simpson, who of course was convicted in the civil trial of the wrongful death of former wife Nicole Brown Simpson and Ron Goldman. Though Simpson was one of the NFL's great running backs, his gridiron heroics have been overshadowed by the personal tragedy surrounding him that quite probably constitutes two convictions on charges of first-degree murder (but for some monumentally stupid jurors in South Central Los Angeles...and Miller still lost out to him).

So congratulations Dennis, and to commemorate the occasion, I present these golden moments courtesy of Media Matters for America.
Posted by doomsy at 9:00 PM