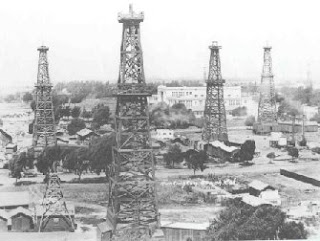 So now U.S. Senator Larry Craig (R-Idaho) and House Rep. Jeff Flake (R-Arizona) are each planning to reintroduce bills to allow for U.S. oil exploration in Cuba, given that the country could yield an estimated 4.6 million barrels, as noted in this story.

Putting aside the contortions that will likely result from fellow Repugs Mel Martinez and Ileana Ros-Lehtinen, as well as Dem Robert Menendez of New Jersey (and also putting aside for a moment the rank hypocrisy of sacrificing the embargo, ostensibly a protest against human rights abuses in Cuba, in the name of potential energy industry profit…”it’s money that matters” first and foremost to the Repugs, never forget), I have some questions:

Is this going to effectively end the Cuban embargo, signed into law in 1962? If the answer is no, then how are the sanctions going to be lifted? Will they be lifted only to allow oil industry development (by the way, the Wikipedia article on the sanctions notes that the embargo was relaxed by the Trade Sanctions Reform and Export Enhancement Act, which was passed by Congress in October 2000 in response to pressure from farmers and agribusinesses and signed by President Bill Clinton, with the relaxation allowing for the sale of agricultural goods and medicine to Cuba for humanitarian reasons).

And what about the Helms-Burton Act? Will that automatically be repealed?

To refresh your memory, I should point out that the law was sponsored by Repugs Dan Burton in the House (Indiana) and Senator Jesse Helms (Crazyland, otherwise known as North Carolina). The bill had been introduced twice in 1995 and survived two Democratic filibusters, and it probably would not have passed at all had Cuban fighter jets not shot down two private planes operated by a Miami based anti-Castro Cuban refugee support group called Brothers to the Rescue.

Part of the bill provides for compensation to U.S. nationals whose property and assets were seized when Fidel Castro rose to power in 1959 (I think Clinton’s signing of the 2000 bill was a bit of a “do-over” for the mistake of signing Helms-Burton into law).

As Wikipedia also notes (in the article on the embargo overall)…

The Helms-Burton Act has been the target of criticism from Canadian and European governments in particular, who resent the extraterritorial pretensions of a piece of legislation aimed at punishing non-U.S. corporations and non-U.S. investors who have economic interests in Cuba. In the Canadian House of Commons, Helms-Burton was mocked by the introduction of the Godfrey-Milliken Bill, which called for the return of property of United Empire Loyalists seized by the American government as a result of the American Revolution (the bill never became law). Furthermore, the European Parliament in 1996 passed a law making it illegal for EU citizens to obey the Helms-Burton act. This EU law was clearly more symbolic than anything else, but virtually eliminated any weight the act had over EU citizens.

This takes you to information on a bill that was introduced in the 107th Congress that would “sunset” the Helms-Burton Act (no further activity has occurred on the bill since it was introduced).

My concern is this, though: suppose we lift sanctions to drill for oil and are able to negotiate an agreement with Cuba, then do so and find oil on property upon which a Hilton Hotel once sat in the “party on” Batista days of the early to mid-1950s. Under the terms of Helms-Burton, will Exxon Mobil then have to pay Paris Hilton for drilling rights?