The Ghosts of Repugs Past 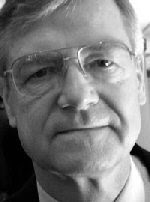 This excellent column by the Rev. Bob Edgar (pictured) appeared in the Philadelphia Inquirer yesterday (as the Inquirer story notes, Edgar served six terms as the U.S. House Representative from the 7th district in the job currently held by Joe Sestak).

Three decades appears to be long enough to forget a few things, at least for President Bush and those who've been advising him on waging war in Iraq. However, the memory of being a freshman member of Congress standing to begin a floor debate over sending more troops to Vietnam will be forever with me.

It was April 22, 1975. President Gerald R. Ford had proposed a way to help us get out of Vietnam more quickly. He wanted hundreds of millions of dollars for something called the Vietnam Humanitarian Assistance and Evacuation Act of 1975. My recollection is that the administration wanted to send 20,000 more ground troops to secure Saigon, the capital of South Vietnam.

It was a proposal many members of the House of Representatives, both Republicans and Democrats, would not approve. One of my colleagues said he didn't "want 40,000 or 50,000 American troops going back into Vietnam to take out 100,000, 500,000, a million South Vietnamese. That can happen under this bill."

It was all intimidating for me, in my first elected political office, to rise and speak on the House floor to challenge the president. But that was what I had been elected to do, and this was a moment when it was the constitutional duty of the legislative branch to check the executive branch of our government.

I was 31 and in office just four months. I had just been elected the previous November, along with 48 other new Democrats, because Americans didn't like the status quo. They wanted a government they could trust. They wanted government officials truly to represent them in Washington.

But the responsibility of the office, the widespread opposition to the war, and the support of Tip O'Neill, Massachusetts Democrat and the House majority leader, all combined to give me a voice on the House floor that began nearly 24 hours of very spirited debate. Occasionally, O'Neill came to the floor to whisper suggestions of legislative maneuvers about which I had no clue. Before my election to Congress, my main training had been as a minister, and I must admit the image of David and Goliath did cross my mind that day.

We lost vote after vote on substitution amendments. But, at last, the fall of Saigon made Ford's request a lost cause. Many of my colleagues were committed to exercising the check and balance of the legislative branch on the executive branch. We were determined not to allow any more money to be spent on more troops for a war we were not winning.

It is somewhat ironic that, on that same day, April 22, 1975, an official White House photograph captured the architects of the proposed troop surge. President Ford is seated behind his desk in the Oval Office. He is conferring with his chief of staff, Donald Rumsfeld, and his deputy, Dick Cheney.

We have just seen a new Congress sworn in. Many say voters spoke loudly last November against the status quo. In 1975, the 49 of us were called "Watergate babies," referring to the crimes that brought down the Nixon administration. Voters then were tired of being lied to, and wanted desperately to get our troops home from the war in Southeast Asia.

The architects of the waning days of the Vietnam War are many of the same planners who pushed our troops into the current war in Iraq. Apparently history has taught them nothing.

History, however, apparently was not lost on the American voters last November. I suspect it will likely not be lost on their representatives in the 110th Congress. I suspect those elected by the people will not approve spending any more tax dollars to extend another unpopular, ill-planned and shortsighted war.

And by the way, Yahoo News via Refdesk notes the following:

(On this date) in 1966, President Johnson said in his State of the Union address that the U.S. should stay in South Vietnam until Communist aggression there was ended.