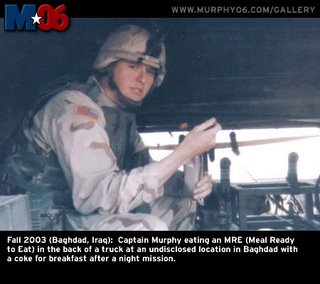 Patrick Murphy and some of his fellow veterans responded to Mikey's scurrilous charges yesterday (issued by Mikey's proxies Kevin Kelly and Richard Barbato).

To me, the most important paragraph in this story is Patrick’s statement at the very end:

“If he (Fitzpatrick) had any backbone he would have denounced those attacks at his own press conference, but he knew what he was doing,” Murphy said. “I just did the job I was asked to do in Iraq. I have nothing to hide and nothing to prove.”

It’s almost laughable, in a way – Fitzpatrick continues to state publicly that the purpose of his press conference was to express disagreement with Patrick’s “extreme” plan as well as the “extreme” non-plan of his own party leaders.

And I know Mikey reached some of “the faithful” drinking the Kool Aid with these words, but I can’t imagine who else took him seriously.

“I appreciate Pat Murphy’s service as much as anyone in our community. The purpose of the press conference was to point out the dangers of his call for an immediate withdrawal from Iraq, which is a position that even the most extreme members of his party disagree with.”

Try checking this out, Mikey, and then try telling us again why the vast majority of the people in this country who oppose Dubya’s Iraq war are “extreme.”

And in a similar vein, this fine letter appeared in the Courier Times today.

The “cut-and-run” attacks by Mike Fitzpatrick and his Republican moneybags on the positions taken by Patrick Murphy and Congressman Jack Murtha on bringing our troops home from Iraq are pure political “trash talk,” sloganeering without substance and vitriol without veracity.

Congressman Murtha is a decorated Vietnam War hero and the best military mind in Congress these days.

Patrick Murphy is a courageous veteran of the Iraq war who risked his life for our country. Mike Fitzpatrick didn’t serve in our military and has little knowledge of military affairs or the issues faced by our troops in Iraq.

In truth, our troops have done everything they were asked to do when their mission was given to them by President Bush in 2003. They took over the country to prevent Iraq from using weapons of mass destruction against us (of course, we now know that there weren’t any WMD) and they ousted Saddam Hussein from power.

They were not asked then or later to get involved in a virtual civil war between the Shiites and the Sunnis. Our interests are not served by “saving” a Shiite religious government that openly supports Hezbollah and is allied to Iran, a government that includes representatives of Shiite death squads that daily deposit dozens of headless and tortured bodies in Baghdad. Yet that is what “stay the course” means to our troops now in Iraq.

What bothers Mr. Fitzpatrick and his Republican managers is the thought that al Qaeda will use our withdrawal as a propaganda ploy – just like they have used our presence there as a recruiting tool and to further jihadist sentiments among disaffected Muslims.

But, as the recently-revealed National Intelligence Estimate has established, these al Qaeda propaganda and recruitment successes are directly attributable to the major mistakes made by President Bush, Secretary Rumsfeld, and their hawkish supporters, like Mr. Fitzpatrick, in their conduct of the war to date.

Mr. Fitzpatrick and his Republican backers want to sacrifice American lives not to protect America, but in a futile effort to save George Bush and the Republican Party from the condemnation of history.

A true patriot, one with moral courage, would stand up and say “Enough!” We cannot gain anything by getting in the middle of a 1,300-year-old war between Shiites and Sunnis, which is what Iraq has become. Let us accept our successes and move on to deal with the more significant threats to our security posed by Iran and North Korea.

Congressman Murtha and Patrick Murphy are true patriots. Mike Fitzpatrick and his Republican “spin doctors” are not.

And as always, to help Patrick (the last big push is beginning, everyone), click here.
Posted by doomsy at 10:57 AM