Two Peas In A Republican Pod

(Note: The post title refers to a pic I don't have anymore - serves me right for "hot-linking," I guess.)

And that’s really sad considering that they’re both Dems (as of now, anyway)…

So let’s go down the list of Democratic U.S. Senators in this area and see where they stand on the winner of the Democratic Senatorial primary recently held in Connecticut, shall we?

- Bob Menendez (NJ) – supports Lamont (kind of a gutsy call since he’s in a scrap with Repug Baby Kean over a Jersey senate seat, and choosing Joe Lieberman could be “safe” for him)

Update 8/15: Speaking of Baby Kean, I think he's coming up a bit short in the "you don't need a weatherman to know which way the wind blows" dept.

- Joe Biden (DE) – supports Lamont as well (Biden has moments when he truly looks like the savior of the party, but then he turns around and does something stupid like voting to confirm Gen. Michael Hayden to head the CIA after showing initial reluctance…a “first-rate guy,” huh?) 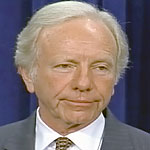 And why should anyone be surprised? As I noted about a year ago (with more than a little bit of an assist from David Sirota)...

Carper has done a lot of things right. He has supported AMTRAK funding, voted against drilling in the ANWR (but I’ve found him weak on the environment otherwise, including his support for confirmation of Gale Norton as interior secretary), and voting against the GOP’s phony prescription drug giveaway to Big Pharma.

However, Carper has also voted to repeal the estate tax, and he also voted for rules restricting personal bankruptcies in June 2001 in addition to his recent vote. He also voted for the Iraq War, as did many of his Democratic colleagues. He also supported the so called partial-birth abortion ban unless the mother’s health was at risk, which wins politicians “sound bite” points but can sometimes prove to be a very difficult proposition in the real world when faced with catastrophic medical circumstances. And of course, Carper is also a member of the Democratic Leadership Council (DLC).

Carper, as far as I’m concerned, is about as “pro-business” of a Democrat as you’re likely to find. However, the fact that he comes from Delaware, the richest state in the nation, doesn’t excuse him one bit as far as I’m concerned. And regarding the three bills I mentioned at the top of this post (CAFTA, the fraud bankruptcy bill and tort "deform"), he voted for all of them.

And as you can see, the 8/1/05 post discusses Lieberman also along with Dianne Feinstein.

Some of my lefty blogger “betters” have quite rightly, I think, said that, because of Lieberman’s recent filing as an independent candidate, he should lose any committee positions he holds in the Senate. But maybe it wouldn’t be a bad idea if the Dems did that to any senators who support Lieberman also.

To show why I feel this way, I’m attaching this link to show you how the Repugs wield power against anyone who doesn’t march in lockstep with them.

As noted, NJ U.S. Rep. Chris Smith used to serve as chairman of the House Veterans Affairs Committee. I say “used to” because Smith bravely stood up to Tom “The Hammer” DeLay, opposing a $750 million shortfall in services for our veterans. DeLay promptly yanked Smith’s chairmanship in response.

I realize this is an “apples and oranges” comparison and I wish to emphasize that Smith was ABSOLUTELY RIGHT. However, I’m not saying this to discuss funding shortfalls for our veterans (important though that is). I’m mentioning this to show how a political party exacts reprisals, a lesson the Democrats sorely need to learn, I think, when it comes to Lieberman and the fallout from his defeat.

Besides, anyone who supports Lieberman now is, by default, a Repug (or a sympathizer at the very least).

Also, the Inquirer published some quotes yesterday from high-profile individuals who had a stake in the primary to one degree or another; as you might expect, I thought the most meaningful ones came from Markos Zuniga at The Daily Kos and John Nichols at The Nation. But to be “fair and balanced,” the paper published this bit of nonsense from Fred Barnes of The Weekly Standard.

Jimmy Carter dodged the issue (Barnes’ concept of “softness on national security") in 1976, winning because of Watergate. But he lost in 1980 because he had proved to be weak on national security as president. In 1984, Democratic presidential aspirants debated who was first to endorse a nuclear freeze, an issue of interest chiefly to the peace-at-all-cost left. In 1988, Michael Dukakis lacked credibility on national security. ...

Oh shut up, Barnes, you toad (though, apparently, he served in the Army for two years, so at least he’s not a typical chickenhawk, but since he’s a kindred spirit, he might as well be).

The “peace at all costs” left, huh?

Let me introduce you to a prominent Democrat of an earlier era who served this country in the Air Force and was awarded a Distinguished Flying Cross for his service. Afterwards, he was tarred by Republicans for allegedly kow towing to Barnes’ “peace at all costs ‘left’.”

Maybe you’ve heard of him, Fred. His name is George McGovern.

Update 2 8/11: At the very least, this should automatically earn Richardson the VP spot on the Democratic presidential ticket in '08.
Posted by doomsy at 10:39 AM