You Don't Want These Upgrades 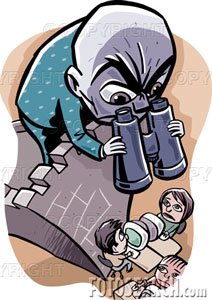 J.D. Mullane of the Bucks County Courier Times concocted a real stinkeroo today. In the process of responding to it, I'll probably end up replicating some of what I said below in my "Who Is Number One?" post. I'll try not to do that, but if and when I do, I apologize in advance.

So without further ado...

There is much hand wringing over President Bush's unauthorized use of wiretaps to eavesdrop on "American citizens."

He gets into trouble right away but using quotes in this manner. That implies that there is some ambiguity in what Bush is doing, and I see none whatsoever. As part and parcel of what he views as his imperial presidency, Dubya intends to reserve the right to take a peek into what we're doing - what our Email says, what web sites we visit, what videos or library books we may take out, what our party affiliation is - whenever he feels like it. Based on the volume of available evidence, even a reality-challenged life form like Mullane should understand that.

The president has defended this by saying he's searching for terrorists.

He'll defend ANYTHING he does by saying that (I think The Bulldog had a great post a few days ago documenting all the shenanigans Bushco has pulled with their inevitable invocation of 9/11 as the reason).

"If somebody from al-Qaida is calling you, we'd like to know why," he said last week.

For many, this explanation in a post-9/11 world pretty much lays the wiretapping issue to rest.

Try to define "many" outside of the Republican National Committee, would you please (if you can)?

But for Americans whose politics have not matured since the hippie era, wiretapping by Bush's National Security Agency amounts to Nixon, Watergate and Vietnam all over again.

Some in the media are even calling for Bush's impeachment.

Just as a refresher, I should point out that, as far as Mullane is concerned, the lowest "rank" he can give to someone is to call that person a hippie or invoke the '60s and its aftermath to try and attack that person's character.

(By the way, Dick Polman of the Inquirer, who could be drunk and/or gravely ill when writing a column one day and still be ten times as good as Mullane could ever be, wrote an excellent piece on this today, some of which I referred to above.)

Actually, at no time in the history of America has the privacy of millions of citizens been so utterly compromised, and on a daily basis, too.

Get ready for a truly astonishing U- turn.

This has nothing to do with bushnixonwatergate. It's the Internet.

Each time you go online, chances are that any number of unknown prying eyes are watching what you do and where you go. This is due to something called "spyware" and it infests most personal computers.

When you open an e-mail that promises riches from Nigeria, or one that guarantees longer bedroom stamina, when you download video or a cool toolbar utility, bet that you are inviting spyware to embed itself in your PC.

What does this have to do the FISA? Or Bush's pledge to seek a warrant for all wiretaps in April 2004 that he was abrogating even as he spoke those words? Or the comment by Jonathan Turley, a professor of constitutional law at George Washington University and a frequent counsel in national security cases, who argues that Bush's wiretaps represent "a serious constitutional crisis" (nod to Polman again)? What say you, Mullane? Hello?

From then on, everything you do online is logged, recorded and sent to the spyware strangers.

Why? They have their reasons.

Sometimes they just want to send you advertising, tailored to your tastes, interests or proclivities.

Watch out, J.D. That was an awfully big "P" word you used just now. People who think you actually know what you're talking about might be confused.

Hey, where did you get my favorite search engine keywords from? :-)

The spyware logs this (as do the people at Google) and the racy pop-up ads and Viagra e-mails roll in.

"Most people don't know this is happening, even though 80 percent of PCs are infected," said Audri Lanford, who, with husband Jim, operates the Web site Scambusters.com.

"It is certainly good for you to think about what you do online as being done in public. You can't go wrong that way. Same with your e-mail," she said.

Or as an IT director told me: "If you've got something to hide, stay away from the Internet."

In addition to logging Web searches you've made, sites you've visited and pages you've viewed, spyware will read your e-mail and access transcripts of your online chats. It can even log each keystroke you make, gaining access to secret passwords.

At its worst, it will swipe credit card numbers and other financial info.

These disgusting applications - "scumware," as computer writer John Fried of the Inquirer refers to them - are certainly capable of doing that, but of course Mullane has to conjure up the worst-case scenario or else he isn't scaring his fellow tiny-brained followers the way he's supposed to.

There are safeguards like electronic "firewalls" and spyware killers. But these can't defeat a mischievous teen computer geek determined to hack your hard drive and look around.

Actually, the people I knew of and read about who have done this sort of thing, such as that creep Stanford Wallace, do so partly to route users to a preferred site or search engine so they can rack up "hits" and get listed on as many other search sites as possible, exponentially adding to their "hit count" and increasing revenue possibilities. The unfortunate side effect for the user - which the spyware writer obviously doesn't care about - is that their garbage code writes to the user's registry, and it thus pretty much clogs your PC and slows your system processes to a standstill, especially Email and web browsing. In that awful event, sometimes the only thing to do is "format C:\" and start all over again, and that is every bit as horrific as it sounds. Of course, if Mullane tried to explain this, he wouldn't be able to engage in the stereotyping that he clearly loves ("hippie dude," "teen computer geek"), so I can see why he wouldn't bother.

How is this any different from coming home and finding a stranger rifling through your personal papers?

Before we get all huffy about Bush's wiretapping, we should ask, what's the bigger threat?

Or hard drive trolls out to snoop, steal and perhaps blackmail?

This is a work of such astonishing idiocy that I am truly at a loss to say anything further about it.

However, as a noteworthy person whose name escapes me once said, out of something awful can come a flourish of wonderment (oh, OK, you got me...I just made that up about about fifteen seconds ago).

With that in mind (sort of), I came up with some products, inspired by Mullane's wretched column, that the current ruling cabal could use in an effort to preserve freedom "for many," as J.D. pointed out with such wisdom earlier. Here they are:

Bushco Not A Virus 2006 - The application decides what processes must be run on your PC based on access rights that are unknown to everyone, including the user. Special manufacturer encryption, approved by top-secret executive orders, enable the installation of cookies and other secretive means to capture all manner of sensitive data for transmission without user approval to the NSA. Instead of a firewall, BNAV comes with a "stonewall" that is activated whenever the user contacts a government official for user procedural information, technical support, or functionality details in compliance with the Freedom of Information Act.

Bolton Blockers - In the same manner as the individual after whom this software is named, who is infamous for harassing those dependent upon him, Bolton Blockers changes and periodically invalidates parent-child relationships through a patented "intimidation" utility in system code in an attempt to maximize performance. The graphical interface is a facial image of the U.S. representative to the U.N., which appears to be calm and restive when the terminate-and-stay resident application is not initialized, but quickly becomes flushed red with bright glowing eyes when it is operational.

Rove Remover - This document-enhancement tool reviews all memoranda and randomly deletes references to the Democratic Party, The Washington Post, The New York Times, The New Yorker Magazine, or the MSNBC cable T.V. news network and online Internet service. In an effort to make it appear that the documents haven't been altered, references to the Republican Party, The Fox Television Network, The Washington Times, The National Review Magazine, and The Heritage Foundation are added instead. This application operates in all document formats, including ASCII text, HTML, and XML.

CheneyWare - This free add-on operates in the background from an undisclosed location and inspects all data and application files on your PC, looking for conditional "true" statements that it can alter and thus turn them to "false" statements. It is strongly advised that CheneyWare's settings are configured so it runs against data files only; if it operates against application files, your PC will be rendered inoperative.

All four of these can be yours if you act now! Remember, if you don't, then "the terrorists have already won."

Update 1/9: A lot of this post is an attempt at humor (whatever you may think of it), but these people are serious. Let's see how fast this ridiculous law gets shot down in a court challenge.
Posted by doomsy at 8:22 PM