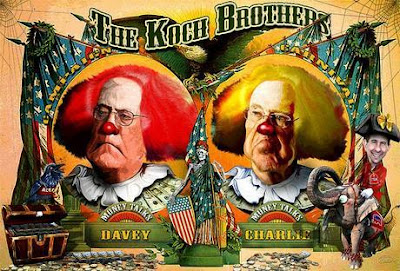 I realize that, under normal circumstances, the correct and proper thing to do when someone dies is to either say something good or, absent that, say nothing at all. But I’m going to make an exception for David Koch, for all of the reasons Farron Cousins points out in the video (and for this).

He deserves to be slow-roasting on a spit in hell at this very moment, right alongside Roger Ailes and The Sainted Ronnie R, who should both be experiencing the same fate (and I likewise will feel no remorse whatsoever when he is joined by his brother Charles one day)…

In lieu of flowers, the family of David Koch requests that mourners simply purchase a Republican politician.

…and of all of the ruinous impacts of voting right-wing strongmen into power, their harm to the environment may be the very worst, as Michael Brooks of The Majority Report points out (to help the Amazon rainforest, click here - more predictable Bolsonaro BS is here)…

…and Cenk and Ana tell us that Generalissimo Trump is prepared to detain migrants indefinitely, doing away with something from 1997 called the Flores Settlement (so many reasons why we’re in 25th Amendment territory right now, and this is but one)…

…and John I. and Jayar Jackson tell us about the Gropenfuhrer’s recent remarks about Jews and loyalty (although apparently, this is Adolf Twitler’s latest craziness – hard to keep up with this utter dumpster fire of a “presidency”...will trying to tell corporate America what to do FINALLY, AT LONG LAST be "a bridge too far," as it were?)…

…and I now give you the latest installment of “This Day In Doomsy History” from 8/23/10…for anyone who remembers the so-called “ground zero mosque” (which wasn’t planned to be built at ground zero and wasn’t a mosque – more here and here), the protest scene in this clip will appear to be familiar (and yes, the Kochs were connected to the “Astroturf” protest of the mosque through something called the American Future Fund in attacks against Dem Congressman Bruce Braley, as noted here)…

…and I know we had some 1969 nostalgia recently with Woodstock, but I thought I’d change things up a bit here with this tune, which was No. 1 on the Top 40 chart for the week ending 8/25/79 (and a NSFW message appears onscreen halfway through, just to warn you).