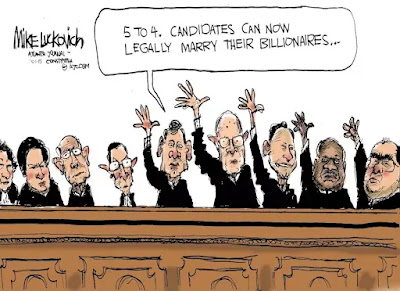 Yeah, there goes the Supreme Court of Hangin’ Judge JR just “calling balls and strikes” again (what a load of bullpuckey, as Rachel Maddow might say, THAT was from Roberts’s confirmation hearing)…the story has to do with the decision to try and deal a death blow to union organizing (here)…yeah, it looks pretty bad, but again, this shouldn’t be a surprise for the reasons noted by NBC legal reporter Pete Williams...take a bow, all you fools who have ever voted for Sen. Mr. Elaine Chao..

…and speaking of Maddow, she interviews Anthony Romero of the ACLU on the Muslim ban (by the way, I would’ve included her “A” block on the Korematsu ruling along with Sotomayor’s dissent, but the whole clip wouldn’t play on MSNBC’s still-utterly-wretched web site)…

…and Pete Williams is back with more Supreme Court news, this one on the retirement of Associate Justice Anthony Kennedy (here) – I don’t think Kennedy was nearly as benign as the reporting here indicates, but yeah, this is still good news for the Gropenfuhrer unfortunately and rotten news for everyone else – yeah, the Repugs just can’t wait to cement the court the way they want, otherwise Kennedy would’ve waited until a new justice is confirmed…once again, rules apply only to Democrats but never to Repugs (and I definitely agree with this)…

…and I know I’m way overdue for a more recent tune here, but that will have to wait given that today is also the 50th anniversary of Elvis’s comeback TV special (here) – I know I put up this tune an awful lot, but if there was ever a day to hear it again, I think this is it.