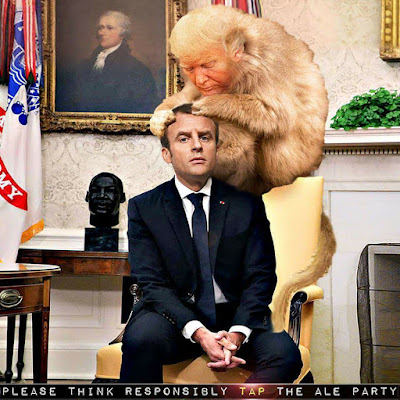 Trevor Noah tells us about Number 45’s potential “bromance” with French President Emmanuel Macron; yes, we can focus on the “dandruff” thing and all of its absurdity, but trying to save the Iran nuke deal is a deadly serious endeavor, and one which, had we an executive branch that was actually sane and rational, we wouldn’t need to engage in of course…

...and Farron Cousins tells us about the doctor of the Gropenfuhrer accused of drinking on the job and over-medicating patients (nice – what else can we expect from an acolyte of Generalissimo Trump? And I thought this was the appropriate "take")...

…and who could actually STILL be supporting our current occupant of An Oval Office at this point (something to keep in mind considering this and this)? Well, probably too many elderly conservative life forms such as the character depicted in this video from 4/25/10…yeah, you guessed it – time for the latest installment of “This Day In Doomsy History” (and before he became part of the “Fix The Debt” scam, former Philly mayor and PA guv Ed Rendell was on the proverbial beam here)…

…and Kyle tells us about actress Natalie Portman declining to accept an award for recent events in Israel – good job by Kyle to remind everyone of Netanyahu’s conduct in 2014 which, as far as I’m concerned, constitutes war crimes (more BDS info is here) – NSFW of course…

…and speaking of strong women, I know I’m a little behind the curve on the video about this brave little girl standing up to bullying, but I couldn’t forget to include it (and kudos to the New York Yankees who replied in support, as well as actor Hugh Jackman)…

Bullying victim Cassidy Slater is getting some support from the NY Yankees ❤️ pic.twitter.com/p7OVHleUlP


...and I was tempted to put up that great song by The Grateful Dead as a bit of a reply, but I did that earlier, so I'm opting for this instead, which I also think is highly appropriate.