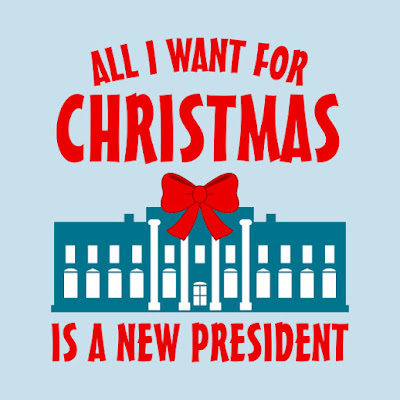 (And yeah, either this guy or this guy would be awful for their own reasons also, but at least they wouldn't have "the attention span of a gnat on meth," as Repug strategist Rick Wilson so correctly put it. And it wouldn't lessen the motivation of "the resistance" either, or it certainly shouldn't anyway.)

(Oh, and by the way, DSC and DCCC, I know you’re trying to get ready for next year, but when you send me your leech-like fundraising emails, it REALLY isn’t a good idea to begin your screeching by telling me how many times you’ve already emailed me trying to suck some $$$ out of me – “Nancy Pelosi Emailed. Steny Hoyer Emailed. Ben Ray Lujan Emailed. Tom Perez Emailed. Zasu Pitts (Google her) Emailed…” I don’t appreciate being talked to like I’m some kind of a f*cking deadbeat!).

And speaking of next year (which I realize we need to do, even though we’re in the midst of the holidays), this 45-second clip should be put in a time capsule and replayed as frequently as possible (“have fun storming the castle,” according to a line from a favorite movie)…

Maddow: GOP says they can't find the money to fund children's health insurance — but they wrote a real estate loophole for Pres. Trump that will cost $414 billion. pic.twitter.com/JOm5xx3mcz


…and here is a related Nail. Hammer. Head. video from Robert Reich…

We know what comes next. Trump and Republican leaders will continue to lie about how great their new tax law is. Then they’ll turn their attention to using the hole it blows in the federal budget to push for cuts to Medicaid, Medicare, and Social Security. pic.twitter.com/uydsopmvDA


…and when it comes to health care, I would say that our friends up north continue to get it right as a country, as opposed to us…

‘It is a human right to be able to know that if you are at your most vulnerable, you’re going to get the care you need.’ - Canadian leader Kathleen Wynne explains why she just doesn’t understand the U.S. health care debate pic.twitter.com/kXa5sHEs0z


…and I know, one day, we’ll have another president capable of basic human decency – just a reminder that Generalissimo Trump’s predecessor knows how to spend the holiday season…

Obama spread some holiday cheer at this Boys & Girls Club — and it will melt your heart pic.twitter.com/Ct0S9qqYOc


…and I know I’ve cut back on the holiday videos largely because of other stuff competing for my time, but here are four that I definitely don’t want to forget about (including the one where I’m STILL looking for a bicarbonate of soda).