The Ghost Of Bushco “Justice” Yields A Mukasey Mess 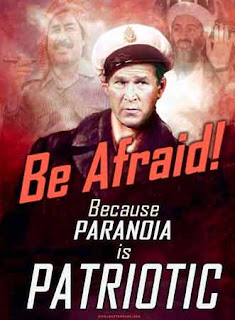 Former Bushco attorney general Michael Mukasey opined in the Murdoch Street Journal today from here, claiming in essence that the trials of the ’93 World Trade Center bombers in civilian courts yielded “9/11 and the murder of nearly 3,000 innocents.”

And after I finished reading this twisted screed, I found myself eternally grateful that Mukasey and the rest of the craven, partisan lunatics of our prior ruling cabal are no longer in power.

Based on my experience trying such cases, and what I saw as attorney general (civilian courts cannot try the Guantanamo detainees). That is not to say that civilian courts cannot ever handle terrorist prosecutions, but rather that their role in a war on terror—to use an unfashionably harsh phrase—should be, as the term "war" would suggest, a supporting and not a principal role.

The challenges of a terrorism trial are overwhelming. To maintain the security of the courthouse and the jail facilities where defendants are housed, deputy U.S. marshals must be recruited from other jurisdictions; jurors must be selected anonymously and escorted to and from the courthouse under armed guard; and judges who preside over such cases often need protection as well. All such measures burden an already overloaded justice system and interfere with the handling of other cases, both criminal and civil.

So, by that logic, Timothy McVeigh should have been tried at Guantanamo (or a non-civilian court of some kind, since his case predated Guantanamo). So should Lee Boyd Malvo and John Allen Muhammad (the latter apparently has an execution date coming up shortly, based on the Wikipedia article).

And Ramzi Yousef, one of the planners of the World Trade Center bombing of 1993, was convicted in U.S. District Court for the southern district of New York and sentenced to life without parole; he currently resides at a supermax prison in Florence, Colorado. Of course, as far as Mukasey is concerned, that trial somehow led to the events of 9/11.

But this is typical for Mukasey, who, as noted here by Shayana Kadidal of HuffPo, “urged congressional legislation to ensure that Bushco never has to explain…

…to a federal court why they have held our clients in Guantánamo for over six years. The other two rounds (of congressional legislation) followed losses in the Supreme Court - the Detainee Treatment Act of 2005, passed a year and half after…the Center for Constitutional Rights won the first Guantánamo case, Rasul v. Bush, in the Supreme Court, and the Military Commissions Act of 2006, passed a few months after the administration's defeat in Hamdan v. Rumsfeld. The Supreme Court explicitly said last month in Boumediene v. Bush that the two prior attempts by Congress to intervene to prevent detainees from having access to the courts were unconstitutional, and that the lower courts should get on with the business of hearing these cases. Unfortunately, that hasn't prevented our nation's highest law enforcement official from trying again to ensure that no court has a chance to rule that one of our clients was wrongly detained during his watch.

The (Bush) administration has learned that it can readily invoke panic by mentioning the possibility that Guantanamo detainees might be moved to high-security prisons in the United States, as John McCain had proposed as a means to shut down Guantánamo. Traditionally, detainees are brought to court to witness their habeas hearings, but it has already been suggested that the easiest way to take detainee testimony is by setting up videolinks or having the judges and lawyers head down to Guantanamo (which federal judges have done in the past). Putting all that to one side, Mukasey's "security" concerns are ridiculous. If we can't "safely" bring a detainee into the U.S. to hear his testimony, then maybe we should all move to that salt mine with Dr. Strangelove."

Mukasey also notes the case of Michael Finton, an American who was radicalized into following militant Islam in one of our prisons (and to achieve maximum shock value, Mukasey also tells us of terrorist Mamdouh Mahmud Salim, who partially blinded a prison guard). And yes, state prisons can be breeding grounds for terrorists, but the study cited below (funded by DHS) about trying to de-radicalize terrorists tells us, in part, the following…

This method proved itself, especially in Egypt. Over the past decade, the Egyptian authorities succeeded in convincing Muslim militant groups such as Jamaa Islamiya and the Jihadists to abandon the armed struggle. Those authorities managed to do so with the help of distinguished religious leaders from the Al-Azhar University, who held long meetings with senior leaders from those two terror organizations. After the terrorist leaders were convinced - through the help of theological arguments - they published articles, books and manifests, calling upon their followers to cease terror and violence, and concentrate on political activity and religious studies only.

It was anticipated that if those detainees were to be tried at all, it would be before a military commission where the touchstone for admissibility of evidence was simply relevance and apparent reliability. Thus, the circumstances of their capture on the battlefield could be described by affidavit if necessary, without bringing to court the particular soldier or unit that effected the capture, so long as the affidavit and surrounding circumstances appeared reliable. No such procedure would be permitted in an ordinary civilian court.

Perhaps instead of trying to concoct more “Ooga Booga!,” “Terra! Terra! Terra!” drivel, Mukasey should instead take some time to consider how the notion of “justice” from the regime he represented has ended up radicalizing those who had no grievance with this country, as well as making us ultimately less safe from future attacks, as noted here.
Posted by doomsy at 3:21 PM