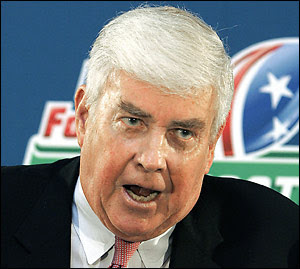 I had a feeling that somehow, in the midst of the eulogies for Jack Kemp, the former football player, U.S. House rep, HUD secretary, and failed presidential and vice-presidential candidate, one of the members of our punditocracy was going to put his or her foot in it, so to speak. And sure enough, Joke Line did just that here (though he did manage to end his post with the phrase I used in the title, so he wins back points for cleverness, as in the Repugs need more Kemp and less Cheney, which I suppose is also debatable).

First, though, I should be gracious and extend sympathies to Kemp’s family and friends. Now that that’s dispensed, let’s check out what the esteemed Time journo has to say…

Kemp was, in a way, the John Edwards of the Republican Party--without Edwards' personal problems, of course.

I have to admit that I’m a little fatigued with the knowledge that the media shorthand for John Edwards has pretty much been enshrined in stone by now ($400 haircut/fancy house/hedge fund/ambulance chaser/skirt chaser/cheated on cancer-stricken wife), and I could write a hundred well-researched posts and barely put a dent into that. And short of Edwards renouncing his hard-earned wealth and notoriety (which he still deserves in spite of everything) and living out of a box or a hovel in the Ninth Ward somewhere, I don’t know how he’s going to do that either.

But Edwards highlighted poverty during his most recent (and, in all probability, final) presidential campaign, as noted here; he was also the first presidential candidate to repudiate his former support for the Iraq war and present a serious health care plan (here).

And to compare him with a recently departed former NFL quarterback who, probably more than anyone else, enshrined the tax cut mantra into the Republican Party consciousness for all time (which they milked for maximum political effect, to the eternal detriment of this entire country for who knows how long) and, despite his professed claims to the contrary, really didn’t give a damn about minorities and others in difficult circumstances except to toss them an odd “block grant” or two which generated headlines but nothing else of substance (as noted here - NY Times content from '89), is particularly disingenuous.

Kemp really never let anything get in the way of his tax cut mantra (as Will Bunch notes in his book, the first Reagan tax cut was authored by Kemp and former Delaware senator Bill Roth, and after it was signed into law, the recession gripping the economy then as now deepened and unemployment spiked) and I think it’s just another example of typical big media hagiography to act as if Kemp were truly a “compassionate conservative.”

Indeed, as Media Matters captured here, Kemp criticized the Kerry/Edwards presidential campaign in 2004 for trying to roll back those idiotic estate tax cuts (gee, wonder how much better off we would’ve been if more people had listened to the two Dems?). Kemp got a pass from our corporate media cousins because he used to play football, and I think he used his formidable intellect to incorporate his experience with primarily African-American players to learn how to develop a language that “talked the talk” on housing and other “hot button” economic issues impacting the poor, though Kemp never “walked the walk” to back up his rosy rhetoric (being a tried and true Reaganite – and a movement conservative at heart, I would argue – he could never comprehend government by itself as an answer to anything).

And if Kemp was bad on domestic policy, he was worse on foreign policy; as Think Progress tells us here, Kemp said Dems Hillary Clinton and John Kerry were “sad, hypocritical and pathetic” for supporting Ned Lamont in his successful Democratic senatorial primary bid in Connecticut in 2006.

So Kemp criticized the Dems for supporting an anti-Iraq war candidate, even though Kemp escaped military service from a “knee problem” which still did not bar him from playing for eight years in the National Football League, as noted here. Is that about right?

Oh, and Kemp (who was called “unmanageable” as a candidate because he ignored timers on his speeches, refused to call contributors, and refused to practice for debates, as noted here) once called for the firing of Reagan Secretary of State George Shultz who didn’t properly support the Strategic Defense Initiative as well as “freedom fighters” in Nicaragua and Afghanistan as far as Kemp was concerned (all of which represented stupendous wastes of resources by this country, to say nothing of sewing the seeds of our present misery, particularly in Afghanistan).

Strangely, though, he ended up being prescient on the plight of his party, stating as follows from here (though he had no answers that could be crafted into policy or legislation, of course)…

“The party of Lincoln,” (Kemp) wrote after the 2008 election, “needs to rethink and revisit its historic roots as a party of emancipation, liberation, civil rights and equality of opportunity for all.”

Spoken like a Repug who had long since shed the cloak of social moderation, fiscal conservatism and international isolation that formerly adorned his party in favor of the ideology that has poisoned their “brand” for the foreseeable future (blame “the usual suspects” once more, starting with Arthur Laffer, Ayn Rand, Buckley, etc.).

To me, using gridiron parlance Kemp would know, his political career was an incomplete “Hail Mary” pass. And as is the case with most politicians, his audience knew the score of the metaphorical game better than he ever did.
Posted by doomsy at 2:44 PM