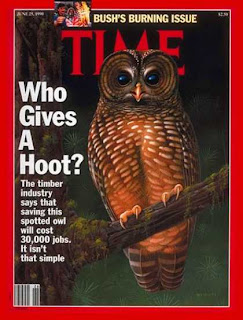 (Get it, MacDonald’s Farm…heh, and I also posted stuff here that may or may not be of interest, though the new “Hit And Run” ad is pretty good.)

...has told a federal court that it will not defend the Bush administration's decision to cut back protections for the northern spotted owl.

The action could affect logging in western Oregon.

Interior Department lawyers said in the motion that the decision was based on an inspector general's report finding there was political interference in owl protections by a former deputy assistant interior secretary.

And who exactly would that former deputy assistant interior secretary be? Why, it would be Julie MacDonald. As noted here…

...MacDonald used her political power to rig countless life or death decisions for imperiled American wildlife under the Endangered Species Act. Species like the Preble's meadow jumping mouse, California red-legged frog, and the Canada lynx are all likely a little closer to extinction as a result of MacDonald's decisions while at the Interior Department. While at the Interior Department MacDonald regularly decided in favor of large landowners, development interests, and corporate polluters at the expense of America's wildlife.

Julie MacDonald resigned in May (2007) after a scathing report from the Interior Department's Inspector General revealed that she had ridden roughshod over numerous decisions by agency scientists concerning endangered species protections. The report found she had violated ethics rules, edited scientific decisions on endangered species issues and passed internal agency documents to outside parties hostile to wildlife protection. Of particular concern is her involvement with a 2003 decision to remove the Sacramento split-tail from the endangered species list, a fish found on property she and her husband own in California.

MacDonald’s financial disclosure statement shows that she earns as much as $1 million per year from her ownership of the 80-acre active farm. Federal law bars federal employees from participating in decisions on matters in which they have a personal financial interest.

The Sacramento Splittail, a small fish found only in California’s Central Valley, depends on floodplain habitat and has been described by the Fish and Wildlife Service as facing “potential threats from habitat loss.”

Today, Rep. George Miller (D-CA) and Rep. Nick Rahall (D-WV), chairman of the Natural Resources Committee, wrote to Interior Secretary Kempthorne requesting a full accounting of MacDonald’s role in the Sacramento Splittail decision, an explanation of her apparent conflict of interest, and a thorough review of the science underlying the decision to remove the Sacramento Splittail from the threatened species list.

“It looks like another Bush Administration official was protecting her own bottom line instead of protecting the public interest,” said Miller, a senior member and former chairman of the Natural Resources Committee and a long-time proponent of the Endangered Species Act and Bay-Delta fish and wildlife issues. “We are going to fully investigate this matter and determine whether public policy was improperly altered because of personal conflicts of interest.

And this tells us of MacDonald’s attempt to scuttle the Northwest Forest Plan, which was instituted in 1993 by President Clinton to “(settle) a lawsuit over the northern spotted owl by setting aside habitat for the owl. But it did not protect all of the remaining old-growth trees and it did not protect anything permanently. It was an administrative solution, vulnerable to the kind of underhanded, undermining tactics so typical of the Bush administration.”

Indeed – as the Alternet story tells us…

Once the DC oversight committee (consisting of high-ranking officials from the departments of Agriculture and Interior, including MacDonald) got involved in the spotted owl plan, scientific principles became a lost cause. The first thing that happened, according to (Dominick DellaSala, a scientist with the National Center for Conservation Science and Policy), was an instruction to "flip and switch" the presentation of threats to the spotted owl. Instead of emphasizing the need to protect the owl's habitat, the recovery plan was to emphasize the threat of competition from an invasive species, the barred owl.

The barred owl is a recent transplant from the East Coast that is out-competing spotted owls in some areas. These interlopers are clearly a threat to spotted owls; the solution is not to reduce the protected habitat, but rather to increase it. Doug Heiken of the conservation group Oregon Wild put it this way: "If the in-laws move in with you, you don't make the house smaller; you make it bigger."

As DellaSala describes it, the process went from bad to worse with repeated memos coming down from DC, instructing the recovery committee to produce an alternative "less focused on habitat preservation," and above all, to sever all connections between the new recovery plan and the current recovery plan in place, which is the Northwest Forest Plan.

And as today’s NPR story tells us…

Withdrawal of the Bush administration measures on the spotted owl measures would make it difficult for the federal Bureau of Land Management to go ahead with plans to boost logging in western Oregon.

And by the way, I haven’t heard anything yet from Obama Interior Department Secretary Ken Salazar on this, but if you wish to contact him and encourage stronger protections for the spotted owl and old-growth forests, click here.
Posted by doomsy at 2:04 PM