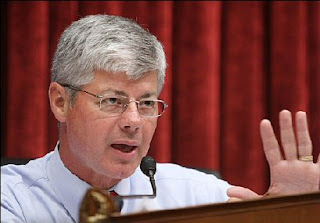 Motivated by this post (oh noes), I wanted to make a proposal to the Obama Administration concerning someone they should at least consider for Commerce Secretary (provided that he shows interest in the job, of course).

And that would be Dem Congressman Bart Stupak of Michigan.

Why? Well, he sits on the Committee on Energy and Commerce chaired by Henry Waxman, as noted here, so he would at least be familiar with pending issues of this nature before Congress.

Also, he teed off on Bushco's former FDA Commissioner Andrew von Eschenbach about a year ago (here) for "(giving) misleading testimony on Sanofi-Aventis SA's antibiotic Ketek during a committee hearing in March" (Ketek has been linked to fatal side effects; Stupak also called for von Eschenbach to step down because of "a total lack of leadership").

Stupak is also responsible for sponsoring a bill that "amend(ed) federal law with regard to the flying of the national flag at half-staff to allow a governor to require that federal facilities in the state lower their flags when a member of the armed forces from that state dies while on active duty" (as noted here, Stupak had tried to persuade Dubya to issue an executive order to that effect, but was unable to do so).

I don't know how familiar Stupak is with commerce issues relative to other candidates, but at this point (hopefully the third time will be the charm, as they say), Obama needs to pick someone who will be a "good soldier" first and foremost without any dirty laundry. And Stupak has solid "moderate Dem" cred, having worked as a lawyer and police officer; he is also a member of the Knights of Columbus (Catholic) and the NRA.

Aside from the political considerations, though, I have a feeling Stupak would do a first-class job.

The only reason I can think of why Stupak would pass on this is that he may be a candidate for Michigan governor in 2010 (Anthony Weiner of New York is also on Stupak's committee; while I'd love to see Weiner in the Obama cabinet, it's perhaps the worst-kept secret in the world that Weiner wants to be the next mayor of New York City - good luck to him).

I'm offering the choice of Stupak because of the truly awful possibility of the commerce post landing in the lap of Harold Ford, Jr. (whose "dead-on political instincts" led to his endorsement of the doomed House Repug Chris Shays of Connecticut last year, among other missteps).

Update 2/24/09: Somewhat on a matter pertaining to commerce, Stupak absolutely nailed it in opposing Mikey Fitzpatrick’s infamous Deleting Online Predators Act, as noted here; however, it looks like Obama is going to settle on another candidate instead.
Posted by doomsy at 7:22 PM