More From The Not-So-Greatest Show On Earth 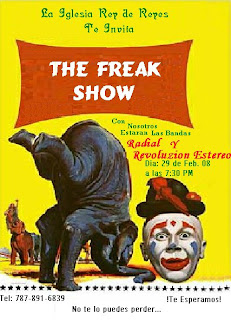 In the category of “who cares…you idiots lost,” we have this from Flush Limbore (who I would ordinarily not bother with, but for the fact that this particular talking point will be turned into entire nonsensical columns by Kristol, Krauthammer, Gerson, Brooks, et al shortly I believe)…

I disagree fervently with the people on our side of the aisle who have caved and who say, "Well, I hope he succeeds. We've got to give him a chance." Why? They didn't give Bush a chance in 2000. Before he was inaugurated the search-and-destroy mission had begun.

(Oh, and Think Progress tells us the following here.)

In addition to the rather obvious point kos makes above (namely, that the Repugs haven’t legitimately won a presidential election in 20 years), I believe the following should be emphasized once more (noted here), and that is the fact that President George Walker Bush once owned an approval rating of 90 percent immediately after the 9/11 attacks.

I realize that arguing with an OxyContin-addicted, reality-impaired semi-wide like ol’ Flush is a fool’s errand, but I don’t think it has been emphasized enough (in what I would only call “Dubya nostalgia” because I truly cannot think of any other way to label such a delusional activity) that there was actually a time when Dubya was popular!

Of course, with the passage of time and the tragic events that followed, to say nothing of the truths that were revealed (and the realization that this individual was nothing but a presidential pretender, and a barely literate one at that), his popularity descended to numbers closer to single digits than all who came before him.

So prattle on, Flush, along with your ideological fellow travelers, even though the circus has left down; consider the canvas unhoisted, the slip knots removed from the center poles, and the wall supports torn down and packed up with everything else, ready to be loaded onto the freight trains, along with the livestock.

But even though you’re “a barker without a carnival,” you’ll always be able to find “the big top” no matter where it is. All you have to do is follow the trail of horse manure.