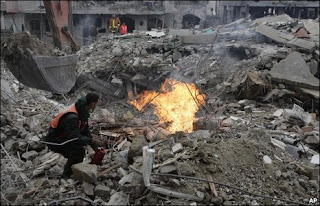 (Note: The photo shows the flames that still burned in the ruins of the home of senior Hamas leader Nizar Rayan in Gaza, who was killed along with members of his family in an air strike on Thursday - from the BBC.)

The following came from Monday’s press briefing with deputy Bushco flak Gordon Johndroe (here – a little late due to the year-end stuff and the holiday, and I also posted over here)…

Q The President, earlier this year - well, I guess last November during the Annapolis process, had hoped that there would be a peace deal (between the Israelis and the Palestinians) before he left office. Obviously that's not going to happen. So what is his feeling now, given what's occurring right now over there, about the prospects for a peace deal in the future?

MR. JOHNDROE: You know, this is a very similar situation that the President found when he took office in early 2001, with increased violence on the ground. I know that his goal is that this violence come to a, as I've said, sustainable, durable and end with a ceasefire, but a ceasefire that's respected by Hamas, so that then all the parties could come together and work towards the goals in the road map and the goals of the Annapolis Conference. The Annapolis goals are ones that have been widely accepted. We saw a good U.N. Security Council Resolution 1850 within the last couple of weeks.

Well, let's just say that this note about Res 1850 piqued my curiousity, so I did some investigating.

The body of UN Security Council Resolution 1850 avoids any meaningful mention of a two-state solution or the creation of a Palestinian state with the exception of a feeble reference late in the text -- added almost as an afterthought -- to "preparation for statehood". While the preamble does mention Resolution 1514, issued five years ago, and notes that "lasting peace can only be based on an enduring commitment to mutual recognition, freedom from violence, incitement, and terror, and the two-state solution, building upon previous agreements and obligations," and even notes "the importance of the Arab peace initiative of 2002" the seven articles of the resolution, adopted on 16 December, focus on committing all parties to continuing an endless peace process.

As Palestinian officials state, the Israeli administration must commit to observing previous resolutions. UNSC resolution 465 calls for dismantling settlements (in the Arab territories), while 467 renders invalid actions taken by Israel to change the character of Jerusalem. Qaddumi noted the dozens of General Assembly resolutions along with UNSC 478 and the International Court’s opinion against the Wall.

“As long as Israel continues to behave as if it is above the Wall and is treated as such, there will be no peace as the Palestinian issue is at the heart of the conflict in the Middle East,” Hamdi Shakura of the Palestinian Centre for Human Rights told PNN this afternoon.

Am I saying that either the Israelis or the Palestinians are innocent here? Of course not. However, I tend to get more than a little perturbed at our media and politicians for their simplistic analysis of the conflict, particularly when, as Greg Mitchell of Editor and Publisher notes here, Israel is criticized more vociferously by its own press than ours. And I think blowing off any serious coverage of Resolution 1850 by our co-opted, bought-and-paid-for corporate media is sadly typical of this problem.