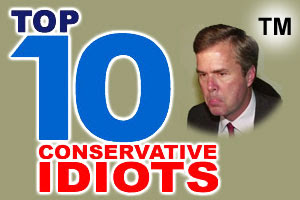 This CNN story tells us that former Florida governor Jeb Bush is considering a run for the U.S. Senate seat that has opened up as a result of the decision of incumbent Repug Mel Martinez not to seek another term (they say Alex Castellanos reported this, but I think he got it from Marc Ambinder; he’s the first person I heard reporting about this).

And yes, I think this is a good thing overall.

Because this gives us a chance to take another look at Jeb’s ties to Cuban exile Miguel Recarey, who had assisted the CIA in its attempts to kill Fidel Castro, but fled this country after he was charged with Medicare fraud, noted here (hmmm, “fled the country,” huh? Where’s the “Marc Rich standard” of outrage over bad “expat” behavior now?).

And I wonder what Jeb thinks now of his admittedly principled stand to protect the Everglades from oil exploration in the past? Will he join the “Drill, Baby, Drill!” chorus? And has he come around to the fact that the climate crisis is occurring because of man-made activity or not?

And let’s revisit Jeb’s role in the Terri Schiavo fiasco again, shall we, in particular, the law he signed to keep her alive against the wishes of her husband Michael, whom he investigated, even though prior investigations cleared Michael Schiavo of any wrongdoing (here).

Another thing – it might be worth noting that Jeb oversaw more executions (21) than his gubernatorial predecessors Bob Graham, Bob Martinez and Lawton Chiles, with nary a pardon to be found (curious for someone who converted to Catholicism, a faith which is opposed to the death penalty, of course – he did put an end to executions when one was botched two years ago, to be fair).

Oh, and did I mention that Jeb is a member of PNAC? And somehow I don’t think Jeb’s endorsement of Rudy 9iu11ani for President during this year’s Repug Florida primary amounted to much.

Oh yes; boy, that was some presidential election in 2000, wasn’t it? And I’m sure you had absolutely nothing to do the purging of over 50,000 eligible voters from your state’s voting registries (yes, the act was overseen directly by Katherine Harris, as we know all too well now, but this could not have transpired without your tacit endorsement at the very least).

So I hope Jeb runs for the Senate. I think it will be fun to keep turning over all of these rocks to see what oozes out all over again (cutting to the chase, wouldn’t he have been the veep on the ticket with McCain instead of “Governor Hottie” if Jeb’s halfwit brother hadn’t totally trashed the Bush “brand” once and for all?).

Update 1: And here's more news about the Bush clan - I would say that that family's gene pool needs a lifeguard (h/t The Daily Kos).