Tell The Big Three To “Give Us The Keys” 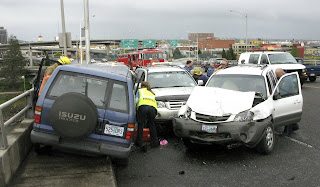 OK, I should let you know at the outset that I am about to flip-flop on my earlier position against a taxpayer-funded bailout of the auto industry, partly because of my shortsightedness and also because I sense an opportunity here for the “pay no price, bear no burden” corporate class to jump in and use the auto industry woes as an excuse to slash hard-earned benefits enjoyed by members of the United Auto Workers employed at Ford, GM and Chrysler, so I must take up an opposite position with some “rethink” on this issue.

(And for those such as Cal Thomas here who predictably blames those benefits as the source of the trouble for the carmakers, I would only point to this Wikipedia article on the UAW, which tells us – among other things – that UAW membership has fallen below 500,000 for the first time since 1941, an indicator of the ground lost not just by the UAW but the union movement overall, particularly over the last eight execrable years.)

I should also note another reason why I may be receptive to a bailout, and it is because of this post by Jonathan Tasini (who, along with Bob Cesca, is one of the few HuffPo writers I seek out from that site), in which he advocates a hell of a lot of good ideas, though he notes first that…

The most dangerous and ludicrous proposals I've seen (for an automaker bailout) call for the union contracts to be torn up. Today, for example, the extremely wealthy columnist Thomas Friedman has the audacity (if I may use that term in a negative connotation) to parrot a line from The Wall Street Journal:

Let's get some facts straight. People who want to blame the UAW for the problems of the auto industry are off-base. Would I have liked the union to be more aggressive about pushing the auto companies a decade ago to move towards more fuel efficient cars? Sure. But, respectfully, the union does not control those kinds of decisions--it doesn't control the board and, as recent history has shown, has struggled mightily to just preserve its wage base (and has had to agree to some painful wage and benefit concessions).

Now, some will say: well, why should UAW members get such "rich" contracts? Let's first get real. UAW members are not living large, though compared to Wal-Mart workers they are better off.

And it’s not UAW pensions that are a problem. Its CEO pensions, for example, that are weighing down the auto companies, particularly GM.

I would ask that you remember that while you wonder when the day will come that Thomas, Friedman and others of their ilk decide to hold corporate malefactors such as those pirates at AIG accountable, as opposed to blaming the UAW, whose membership have given vast amounts of their talent and hard work over the span of their lives to build vehicles that, as it now appears, no longer seem to meet the demand of the marketplace.

Tasini lists six conditions that would accompany a taxpayer-financed bailout of the auto industry, and I applaud his recommendations (and by the way, I realize Friedman is in the process of reinventing himself as an expert on energy matters, which he may be, but it still sickens me to hear him criticize Bushco’s wrongheadedness in this arena without admitting his own culpability for cheerleading the Iraq war, seeing as how any turmoil in that region of the world is bound to affect the price of crude and a change in our driving habits).

When union management causes union failure the federal government can and will take it over and put it in the hands of monitors and force resignations and eventually new elections. Just look at the Teamsters Union.
The auto CEO's are no less criminal than the union officials that get deposed.
If the federal government bails out the auto industry it should take control of the industry, resignations should be one of the consequences and new boards of directors must rise from the ranks.
Also, listening to Haley Barbour champion the success of auto companies in the anti union south one must be reminded, the cost of living in the south is much less than in the north. Most especially for housing.

Too bad GMAC can't bail out the auto industry, or at least GM.