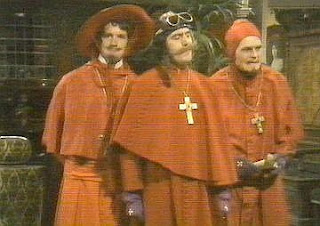 (By the way, I also posted over here today.)

This CNN story tells us…

The Roman Catholic Church is cutting off funds to the community organizing group ACORN, citing complaints over its voter registration drives in the November 4 election as part of the reason.

The Catholic Campaign for Human Development froze its contributions to the group in June amid allegations that Dale Rathke, the brother of ACORN founder Wade Rathke, had embezzled nearly $1 million.

This week, as the U.S. Conference of Catholic Bishops met in Baltimore, Maryland, the campaign's chairman said it was cutting all ties with the group.

"We simply had too many questions and concerns to permit further CCHD funding of ACORN groups," Roger Morin, the auxiliary bishop of New Orleans, Louisiana, told his colleagues in a letter to the conference.

I guess it was too much trouble for auxiliary bishop Morin to do a little investigating into this and found out what I discovered here, notably…

The head of a foundation that has funneled millions to liberal causes anonymously repaid $1 million embezzled from one of the organizations the foundation financially supports.

The New York Times reported Sunday that Drummond Pike secretly agreed to replace the money embezzled from the Association of Community Organizations for Reform Now, or Acorn. Pike is chief executive of the San Francisco-based Tides Foundation.

According to the Times, Pike was aiding Wade Rathke, the Acorn founder and a Tides Foundation board member, when he decided to buy the promissory note requiring the Rathke family to repay money taken by Rathke's brother, Dale.

Acorn discovered the embezzlement in 2000, but did not alert law enforcement officials. Acorn's management committee instead negotiated an agreement to have the Rathke family pay back the stolen funds.

So Pike covered for the Rathkes while Dale made restitution. So the money has been repaid.

So this happened eight years ago and it’s a DONE DEAL NOW, OK? And since Morin didn't even bother to specify his supposed voting registration issues, I'm not going to do his research for him on that score.

Should law enforcement have been notified and charges filed? Probably, but I and other family members have some experience with non-profit organizations, and I can tell you that all kinds of things are apt to be “swept under the rug” as circumstances warrant because divulging them would potentially cripple fundraising and thus threaten the very existence of these operations (kind of funny in a way that the Catholic Church, one of the oldest nonprofits in the world, doesn’t seem to understand that; assuming priests could perform community organizing tasks, I’m sure ACORN would never turn one away because of the abuse scandal).

I’ll tell you what I think is going on here, and it partly explains why the Church didn’t provide funds to assist with the election over the summer.

The problem is that aiding ACORN means aiding minorities who are likely to vote Democratic, which means that they're apt to vote pro choice, and this snit with ACORN over money that probably was never even missed to begin with gives the Church the chance to walk away from the group for good and thus hide the real reason for such a callous decision.

Keep the poor disenfranchised unless they vote “pro-life,” right?
Posted by doomsy at 2:00 PM