Polishing The Windows Of Our Glass House 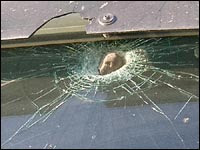 This CNN story tells us that…

China, host of the summer Olympics, is an authoritarian nation that denies its people basic human rights and freedoms, harasses journalists and foreign aid workers and tortures prisoners, the United States charged Tuesday.

And in other late-breaking news, water is wet; more on this story as it develops…

"The year 2007 saw increased efforts to control and censor the Internet, and the government tightened restrictions on freedom of speech and the domestic press," the report says of China. "The government continued to monitor, harass, detain, arrest, and imprison journalists, Internet writers, and bloggers."

The country-by-country report is compiled separately from U.S. diplomatic efforts, and presented to Congress. Secretary of State Condoleezza Rice was releasing it at the State Department.

And to show that this country is “a model of good behavior” in this regard, please consider the following (from here)…

The power to label individuals as “enemy combatants”—and detain them indefinitely—presents one of the most basic threats not only to elemental human liberties, but also to the democratic order. Why? Because a government that can simply banish its foes—and those it erroneously seizes—from public sight simply by labeling them as beyond the pale is not a government that labors under the rule of law.

Also, our government would never perform data mining and conduct surveillance on us with virtually no accountability or try to control the news reported to us on TV (notwithstanding Fox, which is a whole other issue).

But Condi Rice feels somehow that this is an appropriate time to send a message of sorts to our “partner.” Fair enough.

Just remember, though, that as the saying goes, “if China sneezes, we get pneumonia.”
Posted by doomsy at 2:03 PM