A Simple Man Who Spoke Up 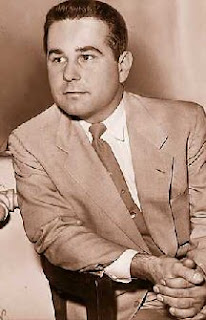 The New York Times reports here that Milo Radulovich, 81, an Air Force Reserve officer who was fired during the anti-Communist fervor of the 1950s, passed away due to complications from a stroke.

For anyone who has seen the movie, “Good Night, and Good Luck” with David Strathairn as the pioneering T.V. journalist Edward R. Murrow and George Clooney (who directed) as his producer Fred Friendly, it isn’t really necessary to explain Radulovich’s importance.

As the Times article tells us…

Mr. Radulovich’s tribulations began in August 1953, when he was a student at the University of Michigan, as he baby-sat and studied a physics book in his home in Dexter, Mich. Two Air Force officers came to his door and handed him an envelope. He opened it to read that he had been removed as an officer in the Air Force Reserve because he was a security risk.

His own loyalty was not questioned. His father and sister were accused of being Communist sympathizers, and he was summarily judged to be risky by association.

The case raised questions about balancing national security concerns and citizens’ rights after Mr. Murrow broadcast a report on Oct. 20, 1953. It appeared on the television newsmagazine program “See It Now.”

Viewers responded by sending 8,000 letters and telegrams to CBS and Alcoa, the program’s sponsor; the letters were 100 to 1 in support of Mr. Radulovich. Newspaper editorials rallied to his cause.

(Friendly) called it “the first time any of us appreciated the power of television.”

And had it not been for the Radulovich episode, Murrow, Friendly, and the rest of the CBS News team would not have decided to take on Sen. Joe McCarthy subsequent to standing up for Radulovich, who was reinstated to the Reserve after the broadcast.

The story of Milo Radulovich is a reminder that anyone in this country can still stand up to challenge authority and make an impact. Doing so may cause only little ripples, as they say, but every tidal wave has to start somehow.
Posted by doomsy at 12:38 PM