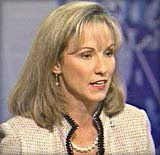 Either White House aide Fran Townsend is one of the stupidest people on the planet, or merely one of the most disingenuous.

As noted here, she said yesterday that Osama bin Laden is “virtually impotent” and “can do little more than send videotaped messages.”

Does she really want to see another attack on our soil? Or is she trying to inflame passions in a world already burning out of control with rage, directing more danger towards our military?

This post by The Daily Kos notes that (as much as I hate to admit it) bin Laden is still formidable as a symbol if nothing else and is capable of communicating to people he knows better than we do in phrasing and symbols that they understand. And as noted here and elsewhere, we are losing the information war because of it as well as the fact that we have not been able to provide services to the people of Iraq that would make them turn away from terrorism; the only way they do that is if they’re attacked by al Qaeda themselves, which made the Sunnis in Diyala attack them in response (I know one of the links is a duplicate from an earlier post, but I think it bears repeating).

And aside from the fact that the speaker is a moron, what does it tell you that the President of the United States chooses to cite bin Laden as he did here?

And it certainly seemed to suit the purposes of the ubiquitous Gen. David Petraeus among others to inflate the importance of the so-called “al Qaeda in Iraq” in this interview last June, with bin Laden as the figurative head of the group mentoring al Zawahiri and his band of thugs. But now, apparently Townsend and others are noting the fact that we have greatly overestimated the so-called AQI group (I guess they can afford to do this since they’ve utilized the maximum propaganda value out of them).

Let us all hope and pray that this nonsense does not lead to further calamity suffered by anyone.

Besides, if bin Laden is so “impotent,” then there remains only one thing to do, doesn’t there?