Pence For His Thoughts? Not Worth It. 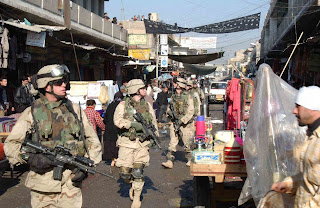 (re: pence being plural of penny…)

Remind me never to go shopping in an outdoor market in Indiana, OK?

I mean, it definitely would be distracting to deal with the sound of Apache gunships and Blackhawk helicopters flying overhead while shopping for produce and trying to get out of the way as cruise missiles are fired indiscriminately at would-be terrorists while I toss some loose change into the pot to support the local 4H club.

And I have a suspicion that wearing that cumbersome bulletproof vest in the midst of the blistering, Midwestern summer heat would be waaay uncomfortable!

Oh, but I’m imagining all of this, you say?

Well, if we are to believe U.S. House Rep Mike Pence, Repug from the Hoosier state, then what I’ve just described is not fantasy, but fact.

(Yes, I know we’ve done the whole “McCain-Iraq-Photo-Op” thing to death, but this was in today’s account in the New York Times, so here goes.)

See, Pence (who traveled to Iraq with McCain) said that the market in Baghdad, where McCain, Pence and the rest of this silly entourage journeyed, “was like a normal market in Indiana.”

“What are they talking about?” Ali Jassim Faiyad, the owner of an electrical appliances shop in the market, said Monday. “The security procedures were abnormal!”

The delegation arrived at the market, which is called Shorja, on Sunday with more than 100 soldiers in armored Humvees — the equivalent of an entire company — and attack helicopters circled overhead, a senior American military official in Baghdad said. The soldiers redirected traffic from the area and restricted access to the Americans, witnesses said, and sharpshooters were posted on the roofs. The congressmen wore bulletproof vests throughout their hourlong visit.

“They paralyzed the market when they came,” Mr. Faiyad said during an interview in his shop on Monday. “This was only for the media.”

He added, “This will not change anything.”

Oh, I have to disagree with Mr. Faiyad on that one. It will change something, truth be told.

It will make the Repugs still supporting this war look stupider than they already are.