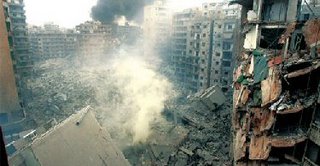 This appeared in the truthout article I linked to yesterday (based on a New York Times story), pertaining to the ongoing war between Israel and Hezbollah.

The decision to stay away from Arab countries for now is a markedly different strategy from the shuttle diplomacy that previous administrations used to mediate in the Middle East. "I have no interest in diplomacy for the sake of returning Lebanon and Israel to the status quo ante," Ms. Rice said Friday. "I could have gotten on a plane and rushed over and started shuttling around, and it wouldn't have been clear what I was shuttling to do."

So what has Madame Secretary been doing since yesterday?

Only this (containing this excerpt)…

U.S. Secretary of State Condoleezza Rice is proposing an ambitious plan with up to two international military forces that would help the Lebanese government stabilize the situation in southern Lebanon, Lebanese political sources said.

Rice pitched the plan Tuesday to Israeli Prime Minister Ehud Olmert in Jerusalem, then traveled to the West Bank city of Ramallah for talks with Palestinian Authority President Mahmoud Abbas.

For awhile, I thought no one in this loathsome administration could be more detestable than Rummy, but Rice has managed to shoot up the list pretty quickly. Between her glowering looks and continually confrontational words and actions, she has emerged as the true cheerleader for this sorry bunch. The only thing I will say in her defense, though, is that I’m glad there are SOME halting movements in the direction of negotiation as opposed to utter destruction, despite her trail of deception that led down that path.

This is typical for the devious behavior and chicanery from this administration (and isn’t it nice to note that, based on this story, Israel considers the Geneva Conventions to be as “quaint” as we do).

Here’s something else from the reality-based community on this (and the comments are good too).
Posted by doomsy at 12:42 PM