Do It For Those Who Serve 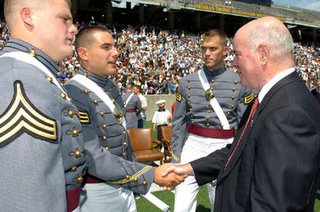 I have a question for anyone who voted for Dubya still riding around with a “Support Our Troops” decal on your vehicle.

When the hell are you going to “get with the program” and join us?

Our service people have gotten the message by now (and they're also no longer allowed to get it out, and yes, I realize that they must be cautious, but somehow I think many of them know that). They know that they were sold a bill of goods to go over and fight an enemy that no longer had a nuclear capability (and by the way, if you don’t want to believe Risen, fine; try believing Hans Blix of the IAEA who said the same thing Risen said before Iraq War II began). And I don’t know about you, but without links to al Qaeda, nukes was the only threat I cared about from Hussein, which I and many others believed that he had at the time from Bushco’s lies.

Try to imagine living with the knowledge that the injury or death of a service member likely resulted (in a good many cases, anyway) from not being properly equipped before they were sent into battle.

Try to imagine the remains of a loved one flown back from overseas stuffed in the luggage compartment of a jumbo jet.

Given all of this, I think the best thing you can do to "support our troops" is to do your part to defend freedom here before you tell them to go defend it (or something that remotely approximates it) in Iraq.

Oh, but you still support Duyba for some reason?

Here are more reasons to wake up.

Bushco steals the presidential election in November 2000 and fights every effort by Al Gore for a single hand recount (yes, Gore screwed up by not requesting a recount of the whole state but that is trivial by comparison now). Yes, I also know that is “so pre-9/11” (which happened on Dubya’s watch), but guess what? It still matters (and don't get me started on '04 either).

Bushco ignores the dire warnings of Richard Clarke prior to the destruction of the World Trade Center, the attack on the Pentagon, and the PA plane crash.

Paul O'Neill, former Treasury Secretary who at least knows how to manage a corporation and not bleed it dry, questions Bushco and is promptly booted and ridiculed.

Scientific data is either ignored or manipulated to the point where it is unrecognizable from its original form (leading to, among other things, an increase in global warming which aided the devastation of Hurricane Katrina).

They concoct a case for war in Iraq based on lies that collapse in the face of truth like tissue paper in a stiff wind (generals such as Eric Shinseki play the Paul O'Neill role and get the same treatment). They also fail to protect our troops by failing to provide for them.

They foist the unbelievable lie on the American people that they actually support an amendment to the U.S. Constitution to ban gay marriage, knowing full well that such an amendment will NEVER PASS (and red state voters, in their everlasting stupidity, fall for the ruse and vote for Dubya so they can feel comfortable with their prejudices at the expense of everything else).

Bushco changes its rationale for war to try and prop up something that approximates Democracy to them in Iraq with this vote for a constitution that basically excludes the Sunnis and a vote for a congress that the Sunnis now allege was rigged, which of course gives them some cover for FINALLY drawing down our troops, which was long overdue (assuming they should have even been there to begin with).

In the process of trying to erode our civil liberties beyond all recognition, Bushco now says that the President and the NSA have the right to eavesdrop on our conversations and the FBI has the right to conduct surveillance on "unfriendly" domestic organizations. Of course, the simple fact which is eminently inconvenient for Dubya is that such activity is illegal (the FISA exists to provide guidelines for doing this, and it remains laughably easy to get a court order for such activity).

(By the way, this is only a partial list of Bushco's transgressions to date).

Am I the only one who sees a pattern in this behavior?

With all of this in mind, here is what should be our New Year's Resolution in this country:

Update: Want still another reason? Ask yourself if this delusional neophyte is making it any safer for our service people by creating this hideous precedent.
Posted by doomsy at 10:07 AM