A "Taxi" For Those In Need 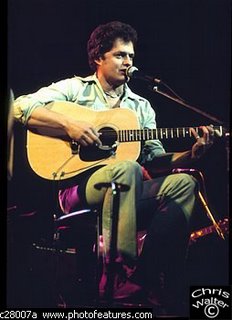 What follows is a great Guest Opinion column that appeared in today's Bucks County Courier Times from a man named Greg Rossi about “Live 8,” but more importantly, about a guy who was trying to feed the hungry and not making headlines in the process years ago:

(Rossi is a clinical social worker and a therapist with a private practice in Yardley.)

Three decades back a passionate and dedicated singer-songwriter steadily gave 50 percent or more of his concert proceeds to organizations that fed hungry people and worked to eliminate the cause of hunger.

Tragically, 24 years ago on July 17th, a car accident on the Long Island expressway cut his life short.

His name was Harry Chapin.

“Feed the man dying of hunger,” the legal philosopher Gratian said, “because if you have not fed him, you have killed him.” Harry Chapin understood these words well. He believed that while it was important to feed the hungry it was also important to free them – to address and remedy the systemic and structural causes of hunger.

Harry knew that there was – and still is today – more than enough food to feed every man, woman, and child on the planet. He understood that hunger is a symptom of poverty and poverty is a symptom of underdevelopment.

Harry was on a mission because he had a vision. Believing that people are basically good, he understood that hunger is a solvable problem, and that heartfelt compassion, when tempered with prudence and reason, can alleviate myriad forms of human suffering.

Harry also understood that compassion is fundamentally an attitude, a choice, and in the final analysis, a decision – the willingness to enter into the heart of someone else’s suffering and be moved to alleviate it. From the gift of one’s heart, he knew that all else, and more flow.

To that end, his passion and his commitment were endless.

So what did Harry do? In addition to committing half of his concert proceeds, this singer-songwriter lobbied then-President Carter to authorize a Presidential Commission on World Hunger, actively served on it, and co-founded the World Hunger Year organization. Sometimes referring to himself as “a third-rate folk singer,” he was a tireless advocate for oppressed people.

In our own country, bodily hunger has many disguises: a child who cannot learn in school because he doesn’t have enough to eat; a senior citizen whose fixed income forces a choice between medication and energy bills; an unemployed person whose resources are necessarily limited and inadequate. Of course, spiritual hunger; be it for companionship, connectedness or community is no less painful.

What can one person do to feed the hungry?

Join an organization such as Bread For The World or World Hunger Year, volunteer at a soup kitchen, or write your legislators to restore funding for school lunch programs. Support the social outreach efforts of your synagogue or church. Read about the systemic and structural roots of hunger. But don’t stop there. There are other hungers. Visit a nursing home, befriend a lonely teenager, or spend time with anyone who has lost a loved one. In your own way, share from your heart. Connect.

The courage to feel others’ pain, the passion to do something about it, a love for humanity, and determination to alleviate human misery – Harry’s was a life well lived. In a tribute written just after he died, Ralph Nader and Mark Green wrote that Harry was “a model of what Justice Felix Frankfurter described as ‘the highest position in a democracy – the office of citizen.” They concluded, “That was no third-rate folk singer. Only a first-rate American.”

Today with Live 8 we celebrate the irrepressible human spirit and the enthused determination of young and older people to touch the lives of others with the kind of patriotism that sees beyond race, creed, class, orientation and national borders to recognize, instead, a friend in the face of those, who, for any reason, suffer.

Compassion that frees, heals and empowers is the kind of music and “live aid” that would make anyone sing out. It was one of Harry’s gifts, it imbued his art and his life, and it was a song he never tired of singing.

That office of citizen? It belongs to us all.