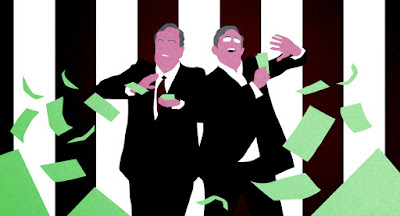 Farron Cousins tells us about the hissy fit between Generalissimo Trump and Chucky and Davey Koch – yep, more misdirection from the “haves” at the expense of the “have nots”…

…probably to try and make us not pay attention to garbage like this - Stephanie Ruhle speaks with Dan Nathan, co-founder and editor of RiskReversal.com, and Josh Brown, CEO of Ritholtz Wealth Management, about another potential Trumpian tax giveaway for the one percent (Nail. Hammer. Head. by Brown at about 4:45…a little bit more of an in-depth takedown of the perpetual con of “trickle down” economics)…

…and Cenk and Ana tells us more contemptible garbage that the Sandy Hook parents have to deal with; yes, do whatever it takes within reason to hold that disgusting life form Alex Jones to account, and anyone who continues to give a social media platform of any time whatsoever to Jones is a miserable coward, but I actually am a little concerned about the precedent that could be established here if Jones loses in court, which he should…the emphasis must be on the threats of violence and the harm he has caused to the Pozners, among the other families (and don’t give me this “politically” shit when he’s making the gun motion with his finger and thumb...Mueller has more guts in his cuticle than Jones has in his entire body)…Jones definitely fails the “yelling fire in a crowded theater” test IMHO (more here, and this is predictable too I guess)…

…and nothing whatsoever against TYT, but I feel like I need a bit of a palate cleanser after that last item – hopefully this summer tune will do (I always loved this cover maybe just as much as the original).