Obama And McCain BFFs? Say It Ain't So! 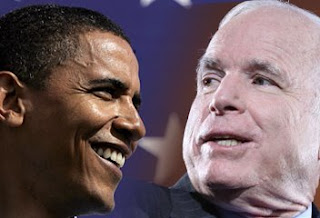 (And somehow I also posted over here too; I surprise myself sometimes.)

It's without a doubt one of the more surprising moves of President-elect Barack Obama in recent days. It may even be unprecedented, certainly in the modern era: On the eve of Inauguration day, President-elect Obama will pay tribute in a special dinner to the bipartisan achievements of his former GOP rival, Arizona Sen. John McCain, a man who just a few weeks ago headed up a campaign that accused the president-elect of "palling around with terrorists."

The dinner –- in addition to separate ones for Vice President-elect Joe Biden and retired Army General Colin Powell will honor Americans "whose lifetime of public service has been enhanced by a dedication to bipartisan achievement," according to the Presidential Inaugural Committee. Inaugural aides say that the dinners were an idea of the president-elect.

Maybe this is a payback to McCain of sorts for some of his conciliatory words towards Obama, such as here where McCain tells the Repugs to play nice with the president-elect, in stark contrast to McCain’s former running mate, who is a perpetual excuse factory (who will misquote her today, I wonder?).

And why shouldn’t McCain be happy? Obama did him a huge favor by tapping former Arizona Governor Janet Napolitano for Homeland Security Secretary, thus removing the highest profile Democrat who stood in the way of unfettered Repug “governance” in that state (I wish I could take credit for that observation, but wingnut Jim Geraghty of National Review Online reported on it here, among others).

So let’s see if McCain decides to help Obama in the Senate by twisting an arm or two on behalf of the president-elect, or if McCain is honestly going to do the right thing.

(Well, even if McCain doesn’t, all the Senate Repug defections for 2010, including this latest one, means that we may get to 60 without McCain anyway. However, an awful lot that is bad now could get much worse by then.)
Posted by doomsy at 3:43 PM