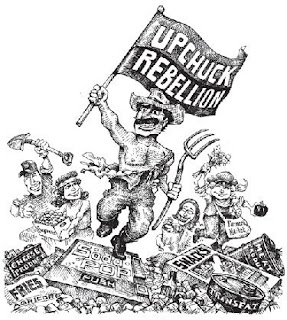 The following is an excerpt from Dana Perino’s misinformation on Tuesday (here)..

Q Just had a question on food safety. A House subcommittee has held six hearings now looking at food safety. There are about 5,000 deaths a year and 325,000 hospitalizations due to food -- outbreaks of toxic foods, contaminated foods. The subcommittee feels that this is increasing at an alarming rate as more of our food comes in that's imported. And I was wondering, is the President aware of this problem, and does he feel the nation's food is safe, or does he feel more needs to be done?

MS. PERINO: A couple of things. One, yes, the President is fully aware of the situation. And last summer, he asked Secretary of Health and Human Services Mike Leavitt to lead a task force to review these issues. And the food safety aspect of import -- all of our imports is critically important and something that we are working on in terms of how do you deal with this issue.

And one of the things Secretary Leavitt suggested was to try to deal with it more at the source, to prevent the problem from occurring in the first place, before any problems arrive in the United States. In addition to that, we've asked for an increase in food safety inspection budgets. So I am not familiar with all of the hearings Capitol Hill has had, but we are working in a cooperative way with Congress to try to reach an agreement.

Under pressure from the food industry, the Agriculture Department is considering a proposal not to identify retailers where tainted meat went for sale except in cases of serious health risk, The Associated Press has learned.

Had that been the rule in place last month, consumers would not have been told if their supermarkets sold meat from a Southern California slaughterhouse that triggered the biggest beef recall in U.S. history.

The plan is being considered as the USDA puts the final touches on a proposed disclosure rule. It had lingered in draft form for two years until February, when 143 million pounds of beef were recalled by Westland/Hallmark Meat Co. in Chino, Calif., after undercover video by an animal-rights activist showed workers abusing crippled cows.

(And by the way, food prices are currently on the rise worldwide, as noted here.)

I posted earlier on the Westland/Hallmark meat recall here, and suffice it to say that, in today’s story, it is clear once more how much the meat industry places a premium on profit over our lives (as follows)…

Partly for competitive reasons, industry groups support the way recalls are currently done, where a description of the recalled product is released by the Agriculture Department's Food Safety and Inspection Service along with some other information including where it was produced.

Retailers must remove recalled meat from their shelves but there's no requirement that they notify their customers about meat already sold, though some take voluntary steps to do so.

There is also no requirement for notifying consumers about genetically modified foods, as noted by author Stephen Lendman here…

Genetically engineered foods saturate our diet today. In the US alone, over 80% of all processed foods contain them. Others include grains like rice, corn and wheat; legumes like soybeans and soy products; vegetable oils, soft drinks; salad dressings; vegetables and fruits; dairy products including eggs; meat, chicken, pork and other animal products; and even infant formula plus a vast array of hidden additives and ingredients in processed foods (like in tomato sauce, ice cream, margarine and peanut butter). Consumers don't know what they're eating because labeling is prohibited, yet the danger is clear. Independently conducted studies show the more of these foods we eat, the greater the potential harm to our health.

Today, consumers are kept in the dark and are part of an uncontrolled, unregulated mass human experiment the results of which are unknown. Yet, the risks are enormous, it will take years to learn them, and when we finally know it'll be too late to reverse the damage if it's proved conclusively that genetically engineered foods harm human health as growing numbers of independent experts believe. Once GM seeds are introduced to an area, the genie is out of the bottle for keeps. There is nothing known to science today to reverse the contamination already spread over two-thirds of arable US farmland and heading everywhere unless checked.

Today, the (genetically modified food) industry is unregulated, and when companies say their foods are safe, their views are unquestioned. Further, (Jeffrey) Smith (author of “Genetic Roulette: The Documented Health Risks of Genetically Engineered Foods”) noted that policy makers in other countries trust FDA and wrongly assume their assessments are valid. They're disproved when independent studies are matched against industry-run ones. The differences are startling. The former report adverse affects while the latter claim the opposite. It's no secret why. Agribusiness giants allow nothing to interfere with profits, safety is off the table, and all negative information is quashed.

As a result, their studies are substandard, adverse findings are hidden, and they typically "fail to investigate the impacts of GM food on gut function, liver function, kidney function, the immune system, endocrine system, blood composition, allergic response, effects on the unborn, the potential to cause cancer, or impacts on gut bacteria." In addition, industry-funded studies creatively avoid finding problems or conceal any uncovered. They cook the books by using older instead of younger more sensitive animals, keep sample sizes too low for statistical significance, dilute the GM component of feeds used, limit the duration of feeding trials, ignore animal deaths and sickness, and engage in other unscientific practices. It's to assure people never learn of the potential harm from these foods, and Smith says they can do it because "They've got 'bad science' down to a science."

And by the way, there is something we can do about all of this as it turns out; this bill by Dem Rosa DeLauro of Connecticut, the Safe Food Act of 2007, has already been introduced of course. This is the purpose of the bill…

So let’s contact our U.S. House reps and tell them to support DeLauro’s bill (from here).

And in the meantime, maybe Dana Perino and Mike Leavitt can each go get a hot dog for lunch (genetically modified, of course).
Posted by doomsy at 10:42 AM