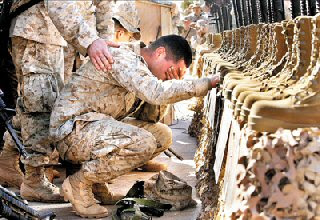 I started this in March, and to follow up, here's more from Bob Woodward’s “State Of Denial,” the third book in his "Bush At War" series.

And to make it easier to go back and read prior posts related to Woodward's book, I set up an index page of sorts here.

I overlooked a recent birthday on Sunday, and I want to note it with this post; that would be to mark the 84th year of the existence of Henry Kissinger on this earth.

And after you read this excerpt dealing with Kissinger and his impact on this White House, you will realize how his monstrous presence infects its every move in Iraq and elsewhere.

Former Secretary of State Henry Kissinger had a powerful, largely invisible influence on the foreign policy of the Bush administration.

“Of the outside people that I talk to in this job,” Vice President Cheney told me in the summer of 2005, “I probably talk to Henry Kissinger more than I talk to anybody else. He just comes by and I guess at least once a month, Scooter and I sit down with him.”

Cheney had worked closely with Kissinger in the (Gerald) Ford administration, when Cheney was deputy and later chief of staff. Kissinger at first had been both secretary of state and national security adviser, an arrangement that every subsequent secretary of state had envied. Kissinger’s ego was monumental, but Cheney found his hard-line advice useful after 9/11. They shared a worldview that international relations were a matter of military and economic power. Diplomatic power derived from threatening to use and then actually using that power. In its rawest form, using the military sent a useful message to the world; it’s dangerous to be an enemy of the United States.

The president also met privately with Kissinger every couple of months, making the former secretary the most regular and frequent outside adviser to Bush on foreign affairs. Bush, according to Cheney, was “a big fan” of Kissinger. Of the Bush-Kissinger meetings, (Donald) Rumsfeld said, “I helped set it up.” The president, who generally discounts the importance of outside advisers, found his discussions with Kissinger important, according to Cheney, Rumsfeld, and others in the White House.

(Chief of staff Andrew) Card and the president’s personal office staff knew that Kissinger was one of the few nonfamily outsiders with a standing invitation to call whenever he was coming to Washington to see if the president was available. By Card’s calculation, about half of the meetings were just the president and Kissinger. Either he or (Condoleezza) Rice attended the other half.

No one in the American foreign policy establishment was more controversial or carried more baggage than Kissinger, then 82 years old.

Vietnam was like a stone around his neck and the prism through which he saw the world. After Lyndon Johnson, Richard Nixon and Robert McNamara, probably no one else was so associated with that war. He had been the architect with Nixon, and later Ford, of U.S. foreign policy from 1969 to 1975. In his writing, speeches and private comments, Kissinger claimed that the United States had essentially won the war in 1972, only to lose it because of weakened resolve by the public and Congress.

If Kissinger felt he had something to say, he generally wrote about it, often in opinion pieces in The Washington Post. He had lots of thoughts about Iraq and Bush. He supported the war. Though he had little problem with Bush’s second inaugural (speech) urging the spread of democracy and the end of tyranny, Kissinger would have been more modest in applying it. “We cannot abandon national security in pursuit of virtue,” he had written in his 1999 book Years Of Renewal on the Ford presidency. The United States “must temper its missionary spirit with a concept of national interest and rely on its head as well as its heart in defining its duty to the world.”

In a practical sense, Kissinger was not at all certain that Iraq was ready for democracy, and he had reservations about using American combat troops in a massive effort to train a foreign military. In addition, since most Iraqis identified first and foremost with their tribal or religious sectarian background – Sunni, Shiite, or Kurd – the question was how to encourage the development of a national Iraqi identity. Closely related was the critical question of who the Iraqi army would fight for.

Kissinger liked Bush personally, though he told colleagues that it was not clear to him that the president really knew how to run the government. One of the big problems, he felt, was that Bush did not have the people or a system of national security policy decision making that ensured careful examination of the downsides of major decisions.

Kissinger sensed wobbliness everywhere on Iraq, and he increasingly saw it through his Vietnam prism. For Kissinger, the overriding lesson of Vietnam is to stick it out.

His column in the Post on August 12, 2005 was entitle “Lessons for an Exit Strategy.” It was almost as long as Bush’s second inaugural address. In the key line, Kissinger wrote, “Victory over the insurgency is the only meaningful exit strategy.” He then made the rounds at the White House with Bush, Cheney and Hadley. Victory had to be the goal, he told all. Don’t let it happen again. Don’t give an inch, or else the media, the Congress and the American culture of avoiding hardship will walk you back. He also said that the eventual outcome in Iraq was more important than Vietnam had been. A radical Islamic or Taliban-style government in Iraq would be a model that could challenge the internal stability of the key countries in the Middle East and elsewhere.

Kissinger told Rice that in Vietnam they didn’t have the time, focus, energy or support at home to get the politics in place. That’s why it had collapsed like a house of cards. He urged that the Bush administration get the politics right, both in Iraq and on the home front. Partially withdrawing troops had its own dangers. Even entertaining the idea of withdrawing any troops could create momentum for an exit that was less than victory.

Rice understood that Kissinger’s message reinforced a conviction that the President already held.

“Why did you support the Iraq War?” Gerson asked him.

“Because Afghanistan wasn’t enough,” Kissinger answered. In the conflict with radical Islam, he said, they want to humiliate us. “And we need to humiliate them.” The American response to 9/11 had essentially to be more than proportionate – on a larger scale than simply invading Afghanistan and overthrowing the Taliban. Something else was needed. The Iraq War was essential to send a larger message “in order to make a point that we’re not going to live in this world that they want for us.” He said he had defended the war ever since. In Manhattan, this position got him into trouble, particularly at cocktail parties, he noted with a smile.

Gerson understood that Kissinger viewed Iraq purely in the context of power politics. It was not idealism. He didn’t seem to connect with Bush’s goal of promoting democracy. “What did you think of the second inaugural (address)?” Gerson asked him.

I should remind us here that Dubya’s second inaugural address, written by Gerson, was full of transformational stuff about how we were going to remake the world in what Bush defined as our image (these guys were flush with electoral victory at the time, see, believing that they had a mandate based on winning absolutely no more than 51 percent of the popular vote, assuming that that was “on the square” of course).

“At first I was appalled,” Kissinger said, carefully covering himself because that was what he had told others, and continued to say in private. On reflection, he claimed, he now believed the speech served a purpose and was a very smart move, setting the war on terror and overall U.S. foreign policy in the context of American values. That would help sustain a long campaign.

On Iran, Kissinger said it was absolutely critical that Iran not be allowed to gain nuclear capability and nuclear weapons. If it does, he said, all of the powers in the region – Turkey, Egypt, Saudi Arabia and the others – would go nuclear. “That would be one of the worst strategic nightmares that America could imagine,” he said. That could dwarf the uncertainties of the Cold War.

Returning to Iraq, Kissinger told Gerson that Bush needed to resist the pressure to withdraw American troops, repeating his axiom that the only meaningful exit strategy was victory. “The president can’t be talking about troop reductions as a centerpiece,” Kissinger said. “You may want to reduce troops.” But troop reduction should not be the objective. “This is not where you put the emphasis.”

He then gave Gerson a copy of his so-called salted peanuts memo, written during the first year of the Nixon administration. In the memo to President Nixon, dated September 10, 1969, Kissinger warned, “Withdrawal of U.S. troops will become like salted peanuts to the American public; the more U.S. troops come home, the more will be demanded.” The policy of “Vietnamization,” turning the fight over to the South Vietnamese military, Kissinger wrote, might increase pressure to end the war because the American public wanted a quick resolution. Troop withdrawals would only encourage the enemy. “It will become harder and harder to maintain the morale of those who remain, not to speak of their mothers.”

For Kissinger, Iraq was the Vietnam sequel. He replayed for Gerson his version of the end of the Vietnam War. The public, the Congress, the Defense Department and the military had all lost their will. At one point, he said, he had proposed to President Nixon a major ultimatum to the North Vietnamese, with dire consequences if they did not negotiate peace. But it didn’t happen, the former national security adviser said wistfully. “I didn’t have enough power.”

A man who was once both national security adviser and secretary of state laments “I didn’t have enough power.” I am just about speechless at the gall and egomania of this individual.

And by the way, this notes one occasion where Kissinger didn’t get what he wanted, and as a result, Congress halted funding for the bombing of Cambodia on this day in 1973 (I’m sure Kissinger blamed that on “the American culture of avoiding hardship” also – Congressional Dems, take note; this is what you do when you’re trying to stop a war).

When this man leaves us one day, I promise you I will not convey even the slightest hint of remorse.
Posted by doomsy at 12:47 PM