Tax Cuts Are Still Their "Jesus" 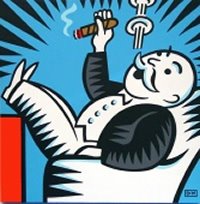 Actor Bradley Whitford uttered that original quote on “Real Time with Bill Maher,” and Bushco continues to prove him right every single day.

So Dubya says he wants “tax relief” to be included in any legislation to raise the minimum wage, huh?

If that tiny particle of brain matter in his head would just fire off a synapse or two, he might remember that a bill exactly like that was defeated in Congress not too long ago because its opponents (including your humble narrator) recognized it as the farcical sham that it was.

This of course is right from Dubya’s script of lies on this issue, as noted in this Common Dreams article. Also, as noted by jobwatch.org (updated in January of this year)…

President Bush has noted that 2 million jobs were created over the course of 2005 and that we have added 4.6 million jobs since the decline in jobs ended in May 2003. But does that mean the labor market is getting back to normal?

Unfortunately, no. Recent job gains lag far behind historical norms. Last year's 2 million new jobs represented a gain of 1.5%, a sluggish growth rate by historical standards…In fact, it is less than half of the average growth rate of 3.5% for the same stage of previous business cycles that lasted as long. At that pace, we would have created 4.6 million jobs last year. If jobs had grown last year at the pace of even the slowest of the prior cycles—2.1% in the 1980s—we would have added 2.8 million jobs. Over the last half century, the only 12-month spans with job growth as low as 1.5% were those that actually included recession months, occurred just before a recession, or were during the "jobless recovery" of 1992 and early 1993.

And we know who led us out of that, don’t we?

Jobwatch also examines in greater depth the effects of government spending on defense and non-defense discretionary spending versus the actual change in jobs, yielding the following conclusion… The mere fact that the projected job growth resulting from increased defense and other gov't spending exceeds the actual number of jobs projected to be added to the economy through 2006 clearly indicates that the tax cuts hardly seem plausible as the engine of the modest job growth in the economy since 2001.

So tax cuts don’t do much to create jobs and leave us saddled with debt; yes, I know it gets more than a little tired to keep pointing this out, but we must because President Stupid Head keeps regurgitating this stuff.

Well, when stories about the economy and our monetary policy in general come up, I usually end up turning to Paul Craig Roberts, so I’ll do so again with this quote…

The clowns in Washington DC imagine that they sit astride a Superpower. Absorbed in fantasies of invading countries and remaking the world in America's image, little do our deluded leaders realize that America is in the hands of our Chinese and Japanese creditors. Should either of these Asian powerhouses decide to stop mopping up America's red ink, the dollar would collapse to such an extent that it would lose its reserve currency status.

When the dollar ceases to be the reserve currency, America will cease to be a superpower.

And all the tax cuts in the world will never fix that.

And by the way, speaking of our financial excesses, this letter appeared in the Bucks County Courier Times this morning…

When you live by the sword, you die by it. Those who salute our worldwide aggression won’t be surprised when it is returned. It will be returned shortly, and not by al Qaeda. The world is almost fed up with us, and that includes “enemies” like most of the European Union, Mexico, Canada, Russia, and China.

For decades, we’ve been using economic sanctions on nations like Cuba, and strangling countries economically. Now, it’s happening to the United States. We might be 10 years from its fruition, but the cows will most likely be coming home in 10 months.

I believe the Saudis are moving to secure $60 oil (a barrel?), and will cut production to assure it. That’s $60 (for) oil in 2000 dollars, which is now $70 and heading to $100. I also believe that the Chinese are about to flood world currency markets with an excess of U.S. dollars, and that just the threat of that has brought the dollar equivalent to 0.75 Euro and 0.51 British pounds, the former being an historic all-time low.

Since oil is (still) traded in U.S. dollars, and since our dollar has lost much of its value vs. the Euro, the British pound and the Canadian dollar over the last few years, we are paying a lot more for oil and a much higher increase in the cost of oil and its products than those in other nations. My memory tells me that gasoline has gone up 100 percent here but only 20 percent in most other places on earth.

Unlike stock market moves, where the executive branch can thank or blame the Fed, these above things are directly attached to U.S. foreign policy and, you guessed it, President Bush and his cabal.

Let’s put this another way: Five more years of the current excesses in spending and warmongering and the United States of America will have to sell property or Fort Knox gold, the same as the Russians and the British had to do in the 1990s, to pay off debts. We cannot spend over $400 billion a year on interest, which is what we paid in 2006. I don’t care what proportion of our GDP that represents.

Furthermore, Americans are not willing to deny our elderly by cutting emergency social programs to pay interest payments on nation building and international civil war creation.

Has it struck anyone that not a single G-8 nation (the UK is throwing out its Prime Minister) is interested in or concerned with Iraq, Iran, Lebanon, North Korea, etc? They are just sitting back and enjoying the slow bleeding of the American national treasury.

Yes, there are some simplistic generalizations here, and I would have like to have seen attribution for these claims, but I think there’s enough substance in this letter to make our government stop screwing around, get out people out of Iraq and make the economy the number one issue again as soon as possible (or at the very least, a close second behind the legitimate war on terrorism).

And I know I’m dreaming, but this is the season of miracles, isn’t it?
Posted by doomsy at 2:44 PM