Oh, and by the way, while one political circus packs up and leaves Tampa and a new one makes its way to Charlotte, I think we should all keep in mind the fact that the planet is still melting, and we still need to do something about that, assuming it is still possible (and leave it to al Jazeera to do the reporting that actually matters)...

Posted by doomsy at 9:13 PM No comments:

Hey, if the Repugs are going to twist that “you didn’t build that” quote, then the Dems should be able to take advantage also (and for more, Matt Taibbi, in typical fashion, delivers here)...

...and I was kind of in the mood for this, so here it is (just felt like changing things up again a bit).

Posted by doomsy at 9:54 AM No comments:

“The Man From Bloomfield Hills” – nice job by Moveon.org…

…and more avoidance by Willard Mitt is on display here (though I must say that, though I support Number 44, it takes more than a bit of chutzpah to try and tether Romney to Afghanistan, which Obama owns exclusively at this point)…

…and by the way, how did Iraq war cheerleader William Kristol, of all people, end up as the corporate media arbiter of political etiquette when it comes to all people, places and things related to the military (here)…

…and I probably shouldn’t like this because Bob’s voice is almost completely gone, but I do – are you looking for a good old fashioned “boy meets girl then loses girl then finds girl and they end up happily ever after” video? Well, this ain’t it.

Update 9/20/12: And in a case of life imitating art, I guess the chair is as empty as this idiot's head; the same goes for that loser in Virginia also (here).

…and gee, THANKS, GOVERNOR BREWER (here - maybe she should have a talk with Michael Moore)…

…and time to rebut that “good Christian” Paul Ryan again…

…and this goes out to the Wisconsin U.S. House rep.

It’s been a few days since I finished compiling the list of the 31 U.S. House Republicans opposed to health care reform, and I wondered what the next step should be. I mean, pointing out that these people fundamentally are frauds and charlatans is a nice, therapeutic exercise I know, even if it ended up being waaay more time consuming than I thought it would.

But how do we actually get rid of them, I wondered?

With that in mind, I did a bit of research and came up with a list of Democratic challengers for not quite all of the 31 that, as far as I know, is as firm as can be expected at the moment (I think there’s a question about William Smith, and the Dem primary won by Harold Whitfield was being recounted the last I checked). Also, I say “not quite all” because Boehner, Broun and Gohmert don’t have Democratic challengers (I couldn’t find any – if there are brave souls out there taking them on that I don’t know about, please leave a comment to that effect). I also hacked around with some HTML a bit and came up with the table format; the incumbent names are linked to the prior posts the same way they were during the countdown, and the challengers are linked mainly to their web sites, but also a Twitter page and a blogspot home page also.

I wish to emphasize that I know nothing about almost all of the challengers, but maybe (if you’re “represented” by any of the 31) it might be a good idea to learn more about these folks (and, if you’re so inclined, to chip in with some coin to help them out). And I’m not going to pretend that trying to knock off the incumbents isn’t going to be a mammoth exercise in some (maybe even most) cases. But that journey of a mile begins with a single step, as they say (or something).

Posted by doomsy at 8:50 AM No comments:

…and I think this song has a lot more to do with the reality we know than the nonsense currently playing out in “the state of Lex Luthor Scott.”

Posted by doomsy at 8:03 PM No comments:

You want to know why I hate the Repugs? Read on… 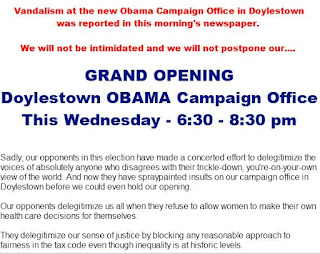 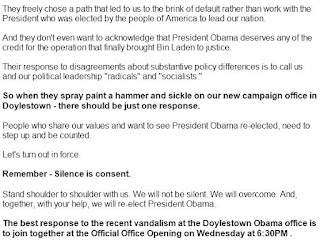 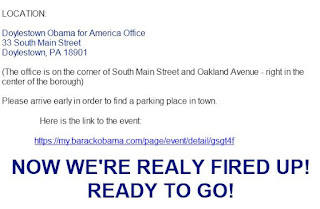 (In case it's hard to read, I should point out that some single-digit-IQ'd life form(s) spray painted a hammer and sickle on the front of the new Obama campaign office in Doylestown, Pa.)

The link to the signup tomorrow is here (and if you really want to extend a middle-digit-on-high to the perpetrators of the vandalism, click here and make a contribution).

Now, for a change of subject, get a load of this asshat being interviewed – the miners weren’t required to attend the Romney event, but attendance was still “mandatory”? And of course, in case anyone didn’t want to attend but just show up to the mine to work, the mine was closed for “safety reasons”? And according to “federal law”? Really??

And in the matter of “payment,” this Rob Moore idiot says, “well, according to FEC law, we couldn’t pay them to attend the event.” The question has to do with payment for the job the miners weren’t allowed to perform because they had to attend Romney’s photo-op, you slug!!

…meanwhile, Rachel Maddow brings us a Tampa edition of “Debunktion Junction” (the last minute is a real hoot given the fools and frauds dispensing methane there this week)…

…and here is my musical response to the coal miner thing (yeah, too easy I know)…

…and this isn’t a bad tune, considering that it doesn’t have a “bridge” – kind of reminds me of REM in the ‘80s, only I can understand the vocals:-).

Posted by doomsy at 8:04 PM No comments:

And now, the moment you’ve all been waiting for (well, maybe)…

…at long last, it is indeed time to name the #1 U.S. House Republican opposed to health care reform, and that would be this guy… 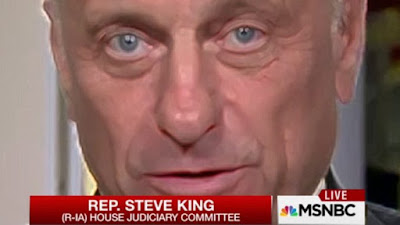 And why Steve King, I hear you ask?

Because he gave us the following quote (from here, including this of course)…


“King added that he’s thinking about introducing a bill, which if it became law, would repeal everything Obama has signed into law,” reports The Messenger, a local newspaper in Iowa. Such an extreme proposition would certainly do away with the biggest Republican bugaboos like Obamacare and the American Recovery and Reinvestment Act, but King’s “reset button” bill will come with many more casualties…

Indeed. As Think Progress tells us, King’s bill would eliminate the Bush tax cuts once and for all (which would be fine with me, by the way), defund the military, relax southern border security, strip medals of honor from 9/11 first responders, and cancel plans to honor The Sainted Ronnie R (which would also be fine with me).

Basically, until the recent nonsense with King’s fellow looney tune rep Todd Akin and his “legitimate rape” episode (which King, of course, defended, probably for no other reason that because Akin was intruding on his crazy turf), I would have considered King a “slam dunk” as the U.S. House Repug most likely to be wrapped in a straight jacket and carted off Hannibal Lecter style from the chamber because he’d lost what’s left of his mind (which may yet happen anyway).

And as noted here, isn’t it accommodating of King to make himself timely in the news again as I’m putting this post together?

I’m not sure if it’s fair to say that King is the craziest individual in the U.S. House, since the Repug field is so wide and deep in that department (and what a commentary on the American voters who send these life forms slithering back to Washington every two years, by the way). He may have the edge over people such as Moon Unit Bachmann and Louie Gohmert in that, according to my unofficial tally, he has introduced more crazy actual legislation than those two (I mean, it doesn’t take a genius to say something dumb in public, but it takes someone maybe only slightly more advanced to structure his or her craziness into something that could potentially acquire the force of law). And King has done that, noted in some of the following lowlights:

So with all of this in mind, please allow me to present the following...

Here, he compared upgrades of light bulbs on Capitol Hill to tactics of the former Soviet secret police (o-kaaayyyyyy)...

...here is a TMI report on King (I give Rachel Maddow and Kent Jones credit for trying to interject some humor, though I find King funny in no way, shape or form)...

...and K.O. basically makes a plea here to the vertebrate life forms who continually send King back to Washington over and over again.

And so there you have it, people. That is my report on 31 U.S. House Republicans who have done their best to obstruct health care reform (with Dems Dan Boren and Mike Ross thrown in as a bonus). Some of them, including Boren and Cliff Stearns (Update 8/29/12: "Mean Jean" Schmidt too), won’t be returning to Washington next year – we already know that. However, I would ask that you please keep all of this in mind as you vote early and often, I’m sure, all over the country this November.

Update 9/8/12: Willard Mitt tells us something about himself by the company he keeps, and I don't mean that in a good way (here).

Oh, and here’s one final musical number dedicated to the person at the top of the list.

Posted by doomsy at 9:18 AM No comments: