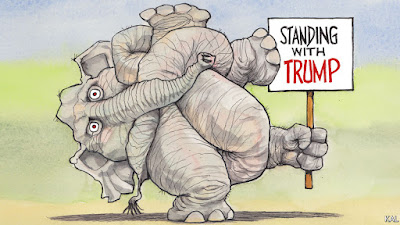 Yeah, I know about the vote, and yeah, I know we can’t do anything in PA about “No Corporate Tax” Pat Toomey until 2022 – heckuva job, all you Keystone State numbskulls who voted for this soulless, craven shill.

Well, maybe there IS a thing or two we can do, such as continuing to replay this clip (and also to do something about Bri-Fi in the House, who also voted in favor of Trump…more here)…

..and John I., David Dayen and Jayar Jackson of TYT bring us up to speed (haven’t seen John this PO’ed before, and he’s spot-on, as is Dayen especially at about 15:00...and oh yeah, let's not forget about #SidekickSue either)…

…and kudos to the reporter who got after Repug U.S. House Rep (and pal of Mango Mussolini) Lee Zeldin here…

...and I can think of no more appropriate tune for this sorry occasion of pre-Trump-acquittal than this one.

Posted by doomsy at 7:14 PM No comments: 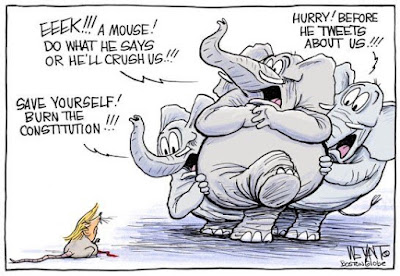 Yeah, there's some wingnut mythology going on here, particularly concerning Barry Goldwater, but I have to admit that this was a pretty good ad against Repug U.S. Senator Martha McSally...as I and other have said before, the Repugs have no trouble going for the jugular when they think they have to...Dems should learn that lesson at long last – more here...

...and kudos once again to Dem U.S. House Rep (and impeachment manager) Adam Schiff for turning the tables on the "party of Lincoln" with this reference...

…and Farron Cousins tells us how the regime of Our Treasonous, Tiny-Handed Orange Dictator is trying to gag government employees (particularly hilarious to hear them invoke The Hatch Act given this)…

…and I would say that “They’re not even bothering to lie to us any more” is about as damning of an indictment of this regime of fools and grifters as anyone can imagine (re, a Wisconsin family farmer saying he can’t take four more years of the Gropenfuhrer and his pals)…

...and happy 90th birthday to the one and only Gene Hackman (the only Marine I ever saw who could go toe-to-toe with the late Lee Ermey)...

…and to me, the title of this song sums up what I feel should be the next step in the Gropenfuhrer’s impeachment - sure it won't happen though (though, to be honest, it’s always a good time to hear SRV whatever the reason – check out his two-handed strumming at about 2:30-2:40…incredible).

Posted by doomsy at 2:30 PM No comments:

If you’re like me, you probably had no idea what the “public charge rule” is, though, if it has anything whatsoever to do with immigration, you can rely on Mango Mussolini to try and wreck it, as Farron Cousins tells us, aided and abetted by the High Court of Hangin’ Judge JR (yeah, it’s all about keeping out the darker-skinned “other” again)…

…and Brett Erlich and John I. discuss Ayanna Pressley taking on Betsy DeVos over the latter’s particularly stupid and fatuous remark about a pro-choice woman supporting slavery…

…and this is something a bit welcoming and uplifting with all of the insanity currently engulfing us (yeah, maybe a bit of mythology going on here, but I think it’s substantively true)…

…and apparently this guy is not due to come to a venue in these parts this year, which is kind of a drag because I thought this was a neat little tune. 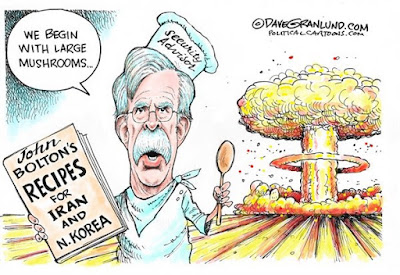 Wouldn’t it be a kick if “Blow ‘Em Up” Bolton ended up sinking the Gropenfuhrer and his minions in pursuit of a lucrative book deal? Apropos for all of these bottom feeders to eat each other like this, as John I. tells us…

…and Brian Tyler Cohen reminds us that, if you ever find yourself needing legal representation, Alan Dershowitz is probably the LAST person you should seek out…

…and sometimes stuff happens that kind of stops you in your tracks, and I would say that the tragic news about Kobe Bryant definitely qualifies – he grew up in Lower Merion, PA, and he was the son of La Salle's legendary player and former Sixer Joe Bryant, though with all due respect, Kobe far outpaced his father on the court…so many life lessons to recall and celebrate…definitely the kind of once-in-a-generation talent who you rooted against when he didn’t play for your team, though you respected him as an elite player, and based on this clip, an elite person also…