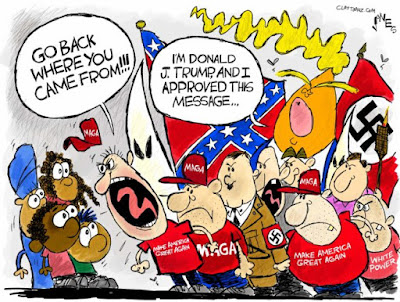 I think this is a Nail. Hammer. Head. commentary from Chris Hayes, a superb example of connecting the dots, something our corporate media in general steadfastly refuses to do (here)…

…and I have to admit that it never occurred to me that the Mississippi ICE raid could be payback for losing a lawsuit, but knowing the regime of Generalissimo Trump, it wouldn’t surprise me in the least (to get workers to stop complaining…and yeah, so what if the little girl is crying her eyes out…as long as the usual suspects get their freaking tax cuts – I’d honestly like to know which Democrats Ashlee Marie Preston is accusing when it comes to benefiting from this horror show, though Cenk makes a great point right after Preston’s inanity about the Dems not pushing back the way they’re supposed to)…

…and Kyle tells us about “Operation Clean Sweep” in Boston, and that’s a pretty benign name for the awfulness that they’re doing with the homeless population – “When all you have is a hammer, everything looks like a nail” indeed (and yes, we should have a national program for sheltering the homeless, but all you have to do is yell “Section 8 Housing” and people totally lose what’s left of their minds…NSFW)…

…and the whole Jeffrey Epstein thing really isn’t my “beat,” as it were (here), and I’m not sold on the veracity of this clip, but this is interesting if nothing else; the only thing I have to say about this is the highly unoriginal observation that anyone who had sex with minors, otherwise known as rape, that was facilitated by Epstein should go to prison, and I don’t care what their political party is/was…

…and Sam Seder and the Majority Report crew talk with Heather Digby Parton about Our Treasonous, Tiny-Handed Orange Dictator Wannabe (interesting to draw a line here back to the ‘60s protests, which I think is completely correct)…

…and here comes another summer tune – hope the weather is fine where you are too. 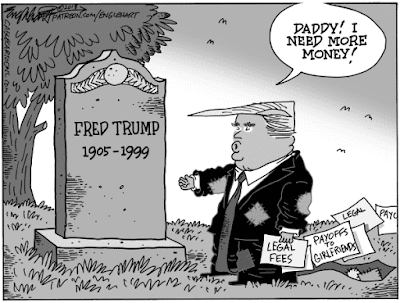 Chris Hayes tells us about corporate America’s sucking up to the Gropenfuhrer in the way of high-priced fundraisers (and Josh Marshall makes a GREAT point about Citizens United saying that speech is really public – can’t try to put that metaphorical genie back in the bottle by making speech private again when it’s con-vee-nient – also, Elie Mystal just kills it here)…

…and I thought this was an informative NowThis clip about automatically blaming mental illness as a cause of gun violence – yes, look at the data, but DO SOMETHING ABOUT THE FREAKING GUNS TOO!!!...and I realize “red flag” laws are literally better than nothing, but I don’t see how they could be of much use unless accompanied by supporting data that truly indicates that the subject whose gun is being apprehended is truly a threat…

…and with the dominant theme of the week in mind, I now bring you the latest installment of “This Day In Doomsy History” (more or less) from 8/7/12 – Tucson survivors “demand a plan” from Obama and Willard Mitt Romney on gun violence; should have intended this message for Congress also, but it was definitely spot-on (and yeah, speaking of weapons of death, it seems like we have a story nearly every day anymore as noted here, and in a related vein, this is typically deplorable also...I blame the hospital administrator too)...

Update 2: This absolutely should be disqualifying.

...and given all of this gun-related insanity, is this really surprising?…

This was inevitable. America doesn't feel safe to those of who live here, thanks to the NRA. Why would foreign travelers feel safe surrounded by random men carrying around long guns that look like the front lines of a war, and knowing even people you can't tell could be packing? https://t.co/LmpdebdpcU


…also, Thom Hartmann speaks with Yosef Getachew of Common Cause Media and Democracy about Gatehouse merging with Gannett, the two biggest newspaper chains in this country apparently (Gatehouse, based in NY, bought the Bucks County Courier Times a couple of years ago and other papers in the Calkins newspaper chain, and anecdotally I hear that that’s a bad thing…and while, on the one hand, it’s a good thing to have diverse points of view, I would argue that it’s a bad thing if we don’t have the savvy to be discerning about who is trying to inform us and who is trying to con us)…

...and David Pakman tells us about Texas Republicans trying to suppress an apparent “hit list” of primary political candidates (and good point about Al Franken as far as I’m concerned – more here)…

…and yesterday marked the 50th anniversary of the iconic cover photo for the Beatles Abbey Road recording (here, and I know there’s yet another anniversary release of material – not sure if I’ll pony up some bucks for that or not) – here is a tune for the occasion. 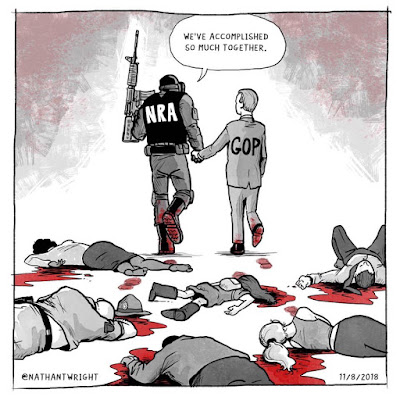 Seth Meyers tells us about our Orange Pestilence visiting El Paso and Dayton in response to the recent gun-related tragedies (and yeah, “No Corporate Tax” Pat Toomey is full of crap, but we already knew that)…

…and Cenk and Francis Maxwell tell us about yesterday’s ICE raids in Mississippi – more here…good point about the Gropenfuhrer having to go to the Big House for hiring undocumented immigrants, among his myriad other abuses (and here is a comparable take from someone I respect in line with what Cenk said about the business owners being forced to do a “perp walk” also)…

…and Richard Nixon resigned 45 years ago today (here) – despite it all, I thought there was a lot of truth in his parting words, from someone who admittedly did wrong but I think realized it at least a little in the end (the ones from the White House podium before he took the helicopter…and I still think that, if Fix Noise had existed back then, he might have gotten away with the Watergate break-in and the cover-up that followed)…

…and apparently Kacey Musgraves is the latest target of the “shut up and sing” crowd, as noted here …sadly and stupidly typical.

Posted by doomsy at 1:01 PM No comments: 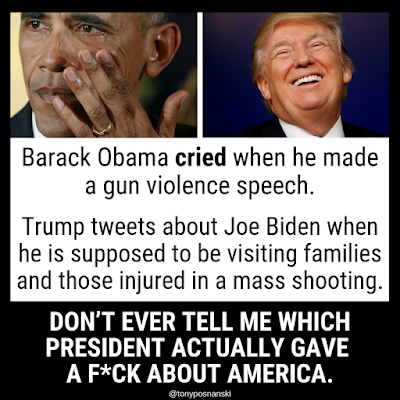 Hey, Toledo, Dayton – what’s the diff to Mango Mussolini (and the outrage particularly from Brooke Thomas is palpable and absolutely called for)…

...and gee, it looks like that “Fancy Farm” gathering for Sen. Mr. Elaine Chao sure included a basket of deplorables, you might say, though they did apologize (and what snowflakes also, and I’m referring to McConnell’s campaign including the spokesman, as Cenk and Ana tell us)…

…and I’m not going to say straight up that Fix Noise is the source of all of this garbage, but they’re absolutely not doing one damn thing about it either except making it worse (here)…

Update: Elizabeth Warren does it again.

We need to call it out: Fox News is a hate-for-profit machine that gives a megaphone to racists and conspiracists. https://t.co/f1QkIE7sbB


…and here’s some more summer escapism while we try to run between the rain drops (at least in this location). 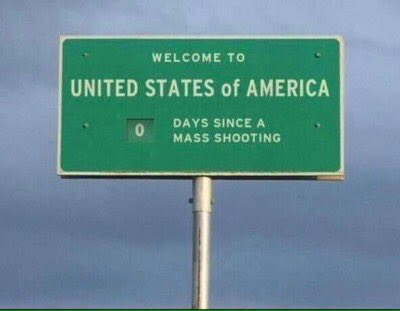 I saw Baton Rouge Walmart trending on Twitter, and I said to myself, yep, I know what this is; fortunately, it wasn’t any worse…

And yes, I think this about says it…

Another shooting at a Walmart in Baton Rouge, this time it was two guys with guns in an altercation and a bystander is the one that got shot. You got to love these "good guys with guns". So glad there are so many of them out there. Protecting us.


…and I’m definitely not a fan of Dem U.S. House Rep Tim Ryan, but good for him knowing what his priorities are (and as awful as Sen. Mr. Elaine Chao is, I see some stern words from Sen. Charles Schumer on this and other matters, but nothing else – and that’s a scary statistic about the Trumpian judges #MassMurderMitch is ramming through the Senate…and I hope more people pay attention too – long past time for this entire country, not just enlightened segments of it, to wake the f*ck up...I don't think Michael Brooks ever watched a "Snagglepuss" cartoon, or else he would have picked up on Sam's reference)…

…and yeah, I need a bit of a summer “palate cleanser” of sorts, even if it is an admittedly silly video like this one (with a bit of a literary theme I realize).

Posted by doomsy at 1:47 PM No comments: 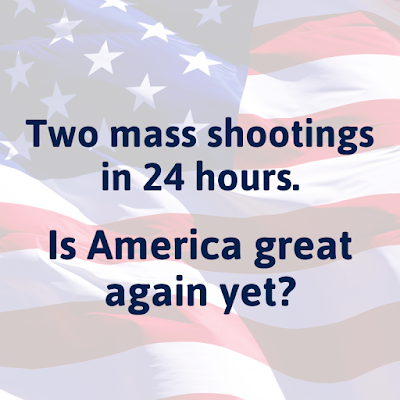 This Now This clip tells us what Sandy Hook, CT moms Michele Gay and Alissa Parker are trying to do about gun carnage in this country…

Update: And by the way, this is typical, but distinctly unhelpful, which is par for the course with this guy (and I really don't give a damn about what he said in the first sentence of that statement, because the second sentence totally negated it as far as I'm concerned).

…and Chris Hayes tells us about the type of voters “Trumpism” is alienating in Texas, which I’m also sure played a role in the retirement of Repug U.S. House Reps Will Hurd and Pete Olson…

…and Brian Tyler Cohen tells us about the commentary from Shep Smith of Fix Noise about the Gropenfuhrer’s ruinous incompetence on the issue of the U.S. and the rest of the global economy (it’s really darkly humorous I think to see what a pass Mango Mussolini gets on this issue from our corporate media since he has the magic “R” after his name – if he were a Dem, he would get savaged around the clock)…

Update: So much winning...

…and with the prior clip in mind, I should point out what I guess we all already know by now, and it is that the U.S. stock market took another nose dive today – given that, I was looking for a song about money and privilege that befits our Orange Pustule, and I came up with this.