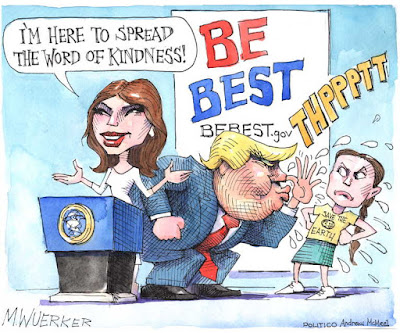 Stephen Colbert gives the Gropenfuhrer and his minions the treatment they deserve in light on 45’s typically disgusting attack against Greta Thunberg, recently named Time Magazine’s Person of the Year as we know by now…

…and I thought it was telling that Huckleberry Graham got up and walked away while Dick Durbin, while questioning IG Michael Horowitz on alleged political bias of FBI investigators getting in the way of them doing their duty as professionals, basically blasted Graham’s idiotic statement to pieces (and yeah, I would say that Graham’s screed is a preview of the show trial Sen. Mr. Elaine Chao will concoct shortly to absolve Mango Mussolini)…

…and Emma Vigeland of Rebel HQ gave us what I thought was a pretty good take on the recently-passed “compromise” defense budget that I alluded to earlier this week, the one that Ro Khanna spoke out against in much the same manner as Vigeland does here…

…and I applaud Farron Cousins’s support here for Bernie of course (re, workers dying and contemplating suicide at Amazon warehouses), but it’s going to take more than one person to fix the mess we’re in, and I’m afraid it’s going take a lot more than one presidential term of office…

...and the prior clip alluded somewhat to holiday shopping by mentioning Amazon I know, which is probably an OK segue into some seasonal stuff, so here it is. 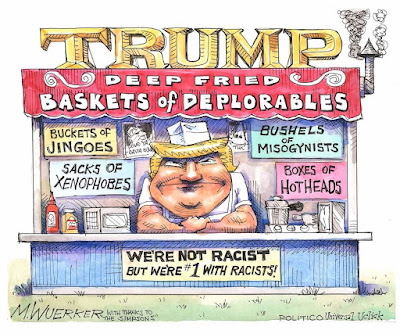 (I know I said earlier in the week that I couldn’t find a video on the Pensacola shooting that gave the context I was looking for – also, I know there was another mass shooting in Jersey City recently, though it looks like the details are still being sorted out. Well, Dem U.S. House Rep Ro Khanna, who continues to impress, gave a speech in response to the rubber-stamped-by-U.S.-House-Dems defense budget including the Gropenfuhrer’s “Space Force” and MORE $$ for defense…what he said in protest was spot-on big time, and if I can find something on it, I’ll put it up here - I’d be shocked if Kyle K. didn’t have a video on it.)

In the meantime, Farron Cousins tells us here about a video featuring impeachment-butt-hurt Trumpsters in Hershey, PA “talkin’ ‘bout a revolution,” you might say, and I think Cousins’s response is spot-on…

Update: Yeah, there always seems to be more to this stuff (here).

…and David Doel shows us AOC doing what she does best, and that is to stick up for working people in this country, on the issue of paid parental leave in particular here (not surprised at how well Iceland is managing this stuff…and I understand Doel’s point about the idiocy of putting this family leave bill in an “omnibus” bill of sorts, but hey – let’s thank everyone in this country who stupidly votes for Republicans and makes us settle for half a loaf, as it were, which is probably appropriate context for what Khanna said also…as Atrios sez, we do so love our children, don’t we?)…

...and here are more seasonal selections, including a number I haven't put up here in a little while. 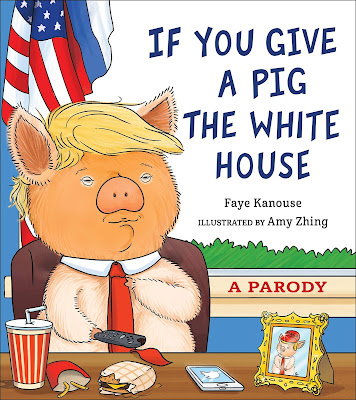 Cenk and Ana tell us about the latest, typical Trumpian imbecilic garbage; leave it the “party of Lincoln” to not understand what actually happens in “Endgame” after that scene, as Cenk says (and just imagine the caterwauling if, say, Obama had come out with an ad like this against Boehner, Cantor, Sen. Mr. Elaine Chao, etc. – he'd be laughed at, quite rightly)…

...and Kyle K. tells us more about FDR and support for Social Security, even from a Republican president (and by the way, the top end marginal tax rate under Ike was 90 percent - I wish Kyle didn’t have that “Tulsi” blind spot, but nobody’s perfect – “a massive shift of the Overton Window to the left” indeed)...

...and here are more seasonal tunes...

…and does anyone have a bicarbonate of soda (for all the times the Trump regime makes us sick to our stomachs)? 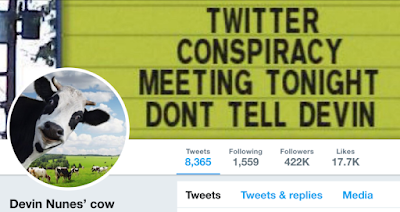 It appears Lee Fang caught Devin Nunes (R-Cow) off guard a bit with a question about Nunes’s calls to Lev Parnas – hmm, do I smell another nuisance lawsuit from Nunes coming up? (here)…

…and Farron Cousins tells us that soybean farmer Chris Gibbs has decided to run as an independent against Gym Jordan for the latter’s U.S. House seat (here)…

…and it’s getting to the point where, as the song goes a bit, I have so many issues with Mayor Pete that I can’t catalog them all, but I think Cenk, Ana and Emma Vigeland touch on a big one here with Buttigieg and the South Bend, Indiana police force…

...and here are more seasonal selections. 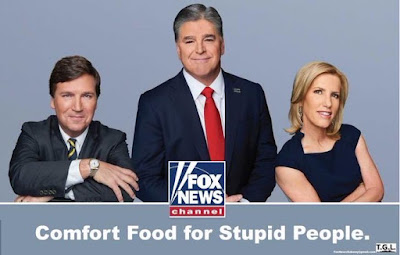 (By the way, I cannot locate for the moment a video on the Pensacola Navy shooting and the suspect in custody who's apparently a radicalized Saudi – at least, I can’t track one down that doesn’t include Mango Mussolini – but I’ll keep trying, and if I can find something, I’ll put it up here.)

Apparently Bill Hemmer is going to get the slot on Fix Noise formerly held by Shep Smith (here), which, as far as I’m concerned, is yet another indicator that what passes for legitimate journalism on that network is on the equivalent of life support with a thread of a pulse (basically, if Chris Wallace goes, they’ve flat lined in that regard)…

…and normally I don’t put up videos of hosts speaking with callers unless they’re particular subject matter experts on something, but I thought this was a great exchange between Thom Hartmann and a gentleman from North Carolina about taxation and the economy of this country vs. Scandinavia (and bless you for supporting expanded health care, Barry)…

…and I know I put up the Michael Brooks video on Hillary Clinton and Howard Stern last Friday, but I happen to know of a particularly ridiculous Twitter spat or two that broke out over the weekend blaming Bernie Sanders for this somehow, and I think David Doel quite rightly brings the receipts on this whole thing, you might say – don’t think I’ve ever seen him so disgusted, and for good reason (and as for Stern, one of the reasons why he may just be the best interviewer out there is that he manages to get scalps, you might say, and he did it here with HRC)…

…and I absolutely cannot let this day pass without wishing a happy 103rd * (!) birthday to a true patriot and hero in our midst, and that would be none other than the one and only Kirk Douglas; he helped to break the Hollywood black list by hiring Dalton Trumbo to write the screen play for this movie (and credit also to Otto Preminger for hiring Trumbo to do the same for Exodus)…

...and it's time once more for some holiday selections.

...and I know I'm a day late with this selection, but I still didn't want to forget it.

Posted by doomsy at 1:36 PM No comments: