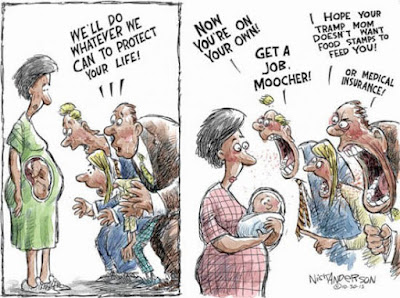 Lissette Padilla, Maytha Alhassen, and Mark Thompson of TYT talk about Iowa’s abortion bill – typical for Not Your Father’s Republican Party; and what does it tell you that Sharia Law could actually be preferable on this subject? And yes, the last minute or so of this is spot-on about Former President Hopey Changey – Number 44 did a lot of good, and boy is he missed now, but I wish he and our side had come out with “guns blazing” on so many issues that matter the way the Trumpsters have...

…and Kyle K. tells us that 9 Democrats actually supported a bill to allow “serial offender” banks like Wells Fargo to actually seize your car under the flimsiest of pretexts IMHO and not let the CFPB do anything about it in response (great…more here; NSFW of course)…

…and I’m not exactly going to say that Al Jazeera is a totally impartial observer here, but I think this is factual reporting that we would do well to keep in mind (and Boris Yeltsin helped bring us our formerly ol’ buddy Vlad Putin, let’s not forget)…

The US and Russia have both meddled in other countries’ elections, as well as each others.’

And they still do. pic.twitter.com/Jq29THSJMR


…and is anybodty out there in the mood for kind of a heavy poem about guns? Well, here it is anyway…


…which I think is particularly apropos for today’s anniversary (more here).

Posted by doomsy at 1:46 PM No comments: 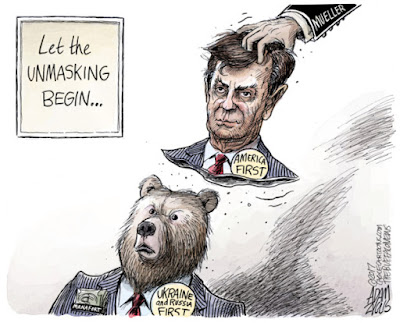 I know it’s hard to keep up with all of the scandals surrounding our Tiny-Handed, Treasonous Orange Delusional Maniac in An Oval Office, but I thought this was important to note from last night; basically, that Ukraine blew up an investigation into former (?) Trumpster Paul Manafort in order to buy U.S. Missiles – how con-vee-nient…and the follow-up to this was a report from Ken Vogel about a key Mueller witness high-tailing it back to Russia…

…and I don’t know why anyone continues to be shocked at this point as to why a Trumpster would hob-knob with a criminal like Manafort, or this guy; definitely a feature, not a bug…

Mike Pence heaped praise on ex-sheriff Joe Arpaio — a man who boasted about creating a 'concentration camp' for prisoners pic.twitter.com/b795hTQ64S

…and I thought this was kind of a nice, spring-ish, pre-summer kind of tune.

Posted by doomsy at 4:13 PM No comments: 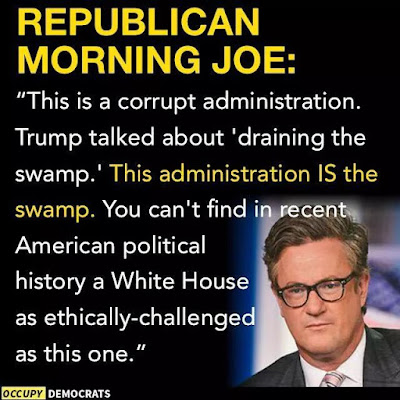 Yep, I think it’s pretty safe to say at this point that we know exactly what Number 45 is – and yet again, I say to any Democrat running for office anywhere that you should make your Repug opponent - including this fathead - sign a promise to make sure they campaign with this reality-challenged narcissistic fraud; tie Trump like an anvil around the neck of your opponent…

President Trump made over 3,000 false claims since taking office (about 6.5 lies per day) pic.twitter.com/m0HVZFLTd3

…and given the corporate media histrionics over comedienne Michelle Wolf at the “nerd prom,” it’s easy to lose track of the typically unhinged rally that President Fergus Laing conducted in Michigan at about the same time, but fortunately, Seth Meyers didn’t forget to remind us…

…and Chris Hayes points out yet again that “Bibi” Netanyahu is an utterly disgusting, repugnant liar (also noted here), and we all already know what the “Gropenfuhrer” is (on the Iran nuke deal…even the brief clips shown here of our Treasonous, Tiny-Handed Orange Dictator are enough to turn my stomach)…

…and Stephen Colbert tells us about Dr. Harold Bornstein – yeah, “Jackson,” “Johnson”…what’s the dif? (I liked the commentary on “All In” on this last night where the panelists basically said straight up that the way Trump acted in seizing the medical records is the way a mob boss acts – ya’ think? Of course, good luck finding the video at MSNBC’s site)…

...and oopsie! It looks like Uday Trump Jr. accidentally admitted to a crime also, and the House Repugs were dumb enough to recently spill the proverbial beans on it (Farron Cousins explains)...

…and I think the title of this song contains some pretty sage advice (wonder if Finley's doctor is named "Jackson" or "Johnson"...heh). 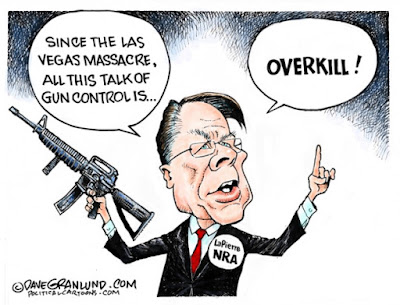 This tells us that no guns will be let in at the upcoming NRA ammo-sexual convention (yes, I know it’s a Secret Service thing, but I still think it’s hilarious)…

Guns are banned during Mike Pence's speech at the NRA. Do these guys not see the irony??? 🤔 pic.twitter.com/wEgldvBz3J


…and from the ridiculous to the even more ridiculous, I give you this, where the Repug leader of voter disenfranchisement (word?), none other than Kris “Contempt of Court” Kobach, believes that he has the right to impart a civics lesson to students protesting our insane gun policy…

…and I know I didn’t have anything to say about the terror attack in Toronto, so I think I should do so now - definitely not intentional on my part and sympathies to the victims of course (And the “incel” movement? Another brand of murdering cowards)…

…and kudos to Bernie Sanders for making us keep our eye on the proverbial ball about the link between tax cuts and decreased funding for public education, among other economic casualties in the name of coddling the “one percent”…

We have a crisis of public education funding in this country. Twenty-nine states gave less money to schools in 2015 than they did before the recession. That is outrageous. @IPS_DC pic.twitter.com/mj43e1lQbA 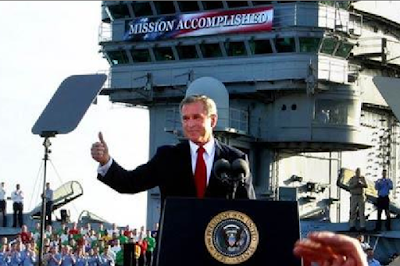 ...and Dubya's “Mission Accomplished” speech was 15 years ago today; what follows is a prior commentary on this from Keith Olbermann...

…and speaking of milestones, we recently observed the 50th anniversary of the debut of the Broadway musical “Hair.” (I once saw a great Showtime doc on The Cowsills – God, what a star-crossed bunch they were; another band of talented kids who, as far as I’m concerned, had a father who let celebrity go to his head). 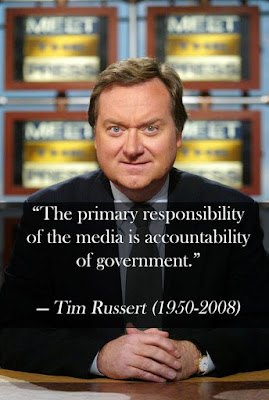 (Russert had his issues, but there were plenty of times, like this one, where he was "on the beam" too.)

I guess, given all the kerfuffle at the “nerd prom” on Saturday, I’m almost obligated to comment on it somehow, so here’s a NowThis video on comedienne Michelle Wolf…

'You helped create this monster, and now you're profiting off of him.' — Michelle Wolf *grilled* the media at The White House Correspondents' Dinner pic.twitter.com/W1r1jeuNeD


…as well as Farron Cousins of Ring of Fire (more here, here, here, here, and here – basically, I’ve spent so much time and wasted so many calories – and probably killed a few brain cells – documenting wingnut outrage that I honestly can’t believe that there are some who claim to be on our side who keep falling for this con over and over...and how predictable is this anyway? And I thought this was noteworthy also.)…

(Oh, and as long as I’m on the subject, here’s a “hot take” I’m sure nobody cares about, but I’ll lay it on you anyway. I don’t know what the hell Joy Reid said in prior blog posts, and I don’t care...well, I care very little in the context of the good work Reid has done. The only slight qualm I have with her is that, when in doubt, she and her network tend to marginalize people like Cenk and TYT, Sam Seder, and Kyle Kulinski under the guise of allegedly being a progressive. However, she has to make a living at The Comcast Network, and I know that’s just the price of doing business, sadly. In her favor, she’s fought the good fight plenty of times, and if anybody out there has forgotten that, then they’re stupid. Besides, I GUARANTEE you that, if you’re enough of a masochist to go back through almost 8,000 posts at this site and about 936 at the Wordpress site, you WILL find something objectionable that I’m not proud of, and I’m sorry about that. When you put your opinion out there for better or worse, that’s the price you have to pay sometimes, and I wish Reid’s detractors would keep that in mind.)

…and speaking of Cenk and TYT, he talks with progressive Andrew Sneathern, running in VA’s 5th congressional district which includes Charlottesville – yeah, I think electing a progressive for that district is a great way to extend a middle digit on high to all of the tiki-torch-bearing neo-nazis and other crazies who protested last August…

…and if this isn’t a warning to Dems, I don’t know what is; try coming up with concrete policy proposals, please (and John Jackson is totally wrong, but this gives you an idea of what we’re up against…of course, if our utterly useless corporate media were doing their jobs instead of looking for the fainting couch in response to a woman comedian at that stupid dinner, then voters might know that, but we also can’t use that as an excuse)…


…and this CBC report tells us about the so-called “migrant caravan” on its way to this country (which of course will be met with the predictable outrage from the Gropenfuhrer and his pals, including the subject of this post)…

…and happy 85th birthday to the one and only Willie Nelson.