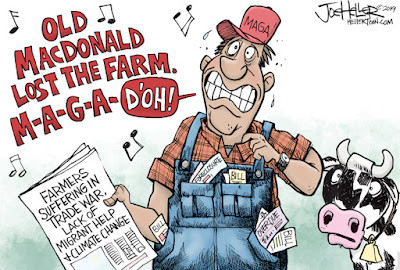 Farron Cousins tells us about one North Dakota farmer in particular who has had enough of Mango Mussolini and his tariffs (I think Cousins misspoke on the “voted on by a court” phrase, but the rest of his commentary is spot-on IMHO)…

...and Cenk and Ana of TYT connect the dots, as it were, between the rapacious, capitalist corporate greed head scam going on in the Amazon and the regime of the Gropenfuhrer, including Blackstone and Stephen Schwarzman (I don't condone violence, but if I were a U.S. soybean farmer watching this, I might be inclined to go get a gun and arrange transportation to Washington, D.C.)...

..and Amy Goodman of Democracy Now talks to Lee Gelernt of the ACLU about the atrocities going on at our southern border; how anyone can claim to belong to any kind of organized religion at all and still support this is something I will never, ever understand…

…and David Pakman tells us that Generalissimo Trump may be turning on Fix Noise at long last (good point at the end about George Lakoff)...

…also, Rachel Maddow interviews Ellen Weintraub of the FEC about that regulating body being short changed by Moscow Mitch and the Repugs, including *President* Orange Cheetoh of course (more here)…

…and David Doel gives David Koch one more shot, which I think is apropos even though the latter has shed his mortal coil, if you will (stuff is included in this clip which should be part of Koch's legacy for sure as far as I'm concerned)…

…and turning to the world of sports, I thought this was yet another good commentary from Dale Hansen on the occasion of the retirement of quarterback Andrew Luck (ironically named given his injury history) from the NFL (here) – I don’t think Luck has to prove a damn thing to anybody, and any elite athlete who sacrifices his health at this age for fame and fortune is playing with fire – not the most original of “takes” I realize (some in the Philly sports media have been speculating that Eagles quarterback Carson Wentz might do the same thing one day, which Wentz is entitled to do as far as I’m concerned – speaking of the Birds, they just completed yet another ho-hum preseason…I realize those games don’t count, but losing 6-0 to the New York Jets? Really??!!)…

…and it seems we have indeed come to the official end of the summer season with the Labor Day weekend upon us (sniff) – I may work in a couple of more seasonal tunes anyway despite that over the next few days, but for now, here’s a little “Friday with Frank.” 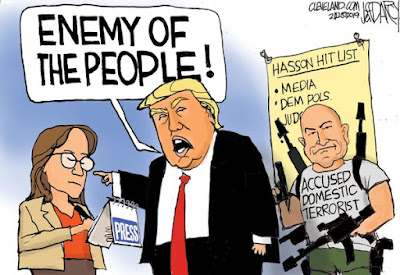 (Oh, and in case we'd somehow forgotten with all of the other Trump lunacy out there, the pic has to do with this.)

Cenk and Ana of TYT tell us about conservatives targeting journalists – and their families apparently – who report negatively on the Gropenfuhrer… good point by Cenk about Roger Ailes with his binder against non-Fox hosts, and an even better point by Cenk about courage...

...and let's not forget about this either...

If true, that explains every kind word Trump has ever said about Russia and Putin. @TheLastWord 10pm

Update 3: Ugh - in the end, just some sloppy journalism (here)...sometimes I wonder if the networks screw this stuff up on purpose; you either have the proverbial smoking gun or you don't...reminds me of Dubya's pals complaining about broken typewriter keys on the memos about 43's time in the Air National Guard (and don't think for a minute that this lets President Fergus Laing off the hook).

…and Sam Seder and the “Majority Report” crew tell us about Trump AG Secretary Sonny Perdue referring to farmers as whiners, pretty much…and gee, to me, this sounds like the dreaded “S” word that the Repugs like to throw around when it suits them, particularly against Bernie Sanders…

…and speaking of Bernie, David Doel of The Rational National takes Zerlina Maxwell to task for claiming that Sanders doesn’t have any policies, or something – try doing the admittedly hard work of reviewing everything Sanders has written to see if you have an actual disagreement before opening your pie hole next time, OK?...

…and Farron Cousins tells us why it’s a bad idea to cut payroll taxes as a way to try and get out of a recession (oh, but Our Treasonous, Tiny Handed Orange Lunatic In Charge tells us that we’re not heading towards that, of course – uh huh)…

…and here is a somewhat more conventional musical number for this time of year (James gets a little rude part of the way through, so please listen on your headphones). 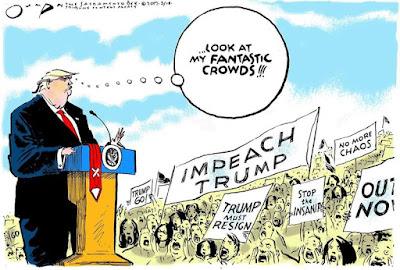 Ali Velshi sits in here for Lawrence O’Donnell on “The Last Word” and interviews reporter Leigh Ann Caldwell, who tells us that voters may be a little further ahead of the media/political/industrial complex when it comes to the “I” word and the Gropenfuhrer (and I guess I shouldn't be surprised by Conor Lamb sitting on the fence here, though it is disappointing)...

…and in another bit of Dem squeamishness, this clip tells us that the DNC voted down a climate debate (and the resolution definitely failed with the full committee – ugh...and I know it's way too early to take this stuff seriously, but the polling data I'm seeing tells me that Biden is sinking like a stone)...

…and this clip gives us a little insight into what it’s like to try and live off food stamps (sounds like, for at least one week a month, you’re on your own; I give you "the ownership society," something right out of Dickens and “Les Miserables”)…

…and Sam Seder and the crew of “The Majority Report” quite rightly take Kelly O’Donnell of NBC News to task over Generalissimo Trump and immigration (slightly NSFW, and sorry I’m a little behind the curve on this)…

…and Kyle K. tells us how “Goodhair” Perry got scammed recently (if The Eternal Molly Ivins were still with us, she definitely would have fun with this, though, given that Perry is in charge of our nukes, I suppose it isn’t that particularly hilarious)...

…and my musical selection from last Friday was stuck in the ‘70s for sure, and this one is too…last Saturday marked the 45th anniversary of the release of “Verities and Balderdash” by Harry Chapin; we know “Cat’s In The Cradle” was the signature song from that recording, and “Shooting Star” was also a memorable tune, but I’m going to take a bit of a deeper dive with this one (this tune is preachy as hell, but as you know, that’s never stopped me before :-).