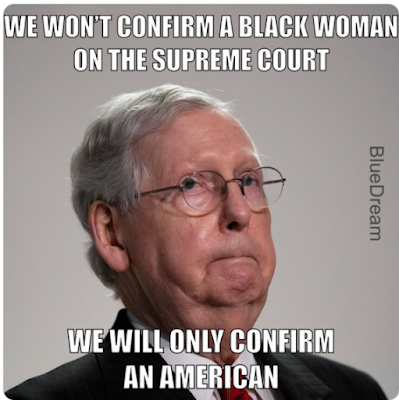 John and Viviana Vigil of The Damage Report tell us about the reaction from The Swanson TV Dinner Heir to the news the President Biden plans to nominate an African American woman to the Supreme Court (I think the context from this article about The Sainted Ronnie R matters also)...yeah, if “Tuckums” isn’t making his audience of elderly conservative white people angry, scared or agitated in some way, then he’s not doing his job (and it’s so ridiculously typical for the Fix Noise talking head to say that, if you support Biden, then you support segregation, which is typical BS...and I have a feeling that African American women are more than 7 percent of the population too - this I'm sure is closer to the truth...I guess we really can’t expect much more from a network that gets agitated over "progressive" M&Ms and Minnie Mouse in a pants suit...here)...

...and sticking with The Roger Ailes BS Factory, Chris Hayes tells us how that network’s lies about the COVID vaccine are killing Trump voters in an interview with journalist Eric Levitz...

...and Beau talks about the school board in Tennessee deciding to ban the book Maus about the Holocaust (to commemorate #HolocaustRemembranceDay...nice touch, and yes, I'm being sarcastic...and I think Beau absolutely nails it when he says that the parents fell down and don't want to be embarrassed about missing the rise of authoritarianism under TFG – more here)...

...and every damn time I hear about somebody in this country trying to ban a book or shove LGBTQ individuals back into a metaphorical closet (to basically preserve the white patriarchy served by that abattoir of a TV network noted in the first two clips), I find myself recalling this clip from this great movie...

Update 2/1/22: And news items like this make me recall the prior clip also.

...and I need to catch up with my Second Thought videos, and the latest one has to do with Why Student Loan Debt is So Hard to Forgive (and the “military coinage slavery complex,” huh? Interesting...and yes, Biden should forgive student loan debt, but I think the notion that he somehow failed in his first term merely because of this single issue, along with Manchinema’s antics, is completely absurd...still, though, I think #46 should make that happen: Markos of Daily Kos makes a powerful argument for that here, and kudos to Dem U.S. House Rep Dwight Evans for this also)...

...and RIP Don Wilson of The Ventures.