Ready For Your Close-Up, Dubya? 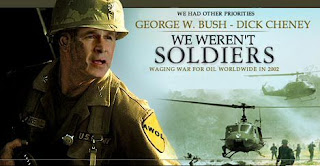 Much like a trained seal trying to balance a beach ball on its nose in lieu of not knowing what else to do, our now-and-forever red state president open up his demagogic playbook again in a speech where he took another shot at “Hollywood values.”

And I guess that’s a funny remark for people such as Robert Duvall, Ron Silver, Kelsey Grammer and Cicely Tyson, among other actors who supported Dubya in ’04.

It’s really not worth my time to list all of the problems facing our nation and the world once more, and it really isn’t worth your time either for me to make you read about what you already know. It’s just sooo depressing to watch Incurious George continually try to present himself as an adult in a job for which he has continually been overmatched, imagining “issues” handed to him straight from the Republican National Committee while everything else disintegrates around him, and he remains oblivious.

I’ll tell you what then, Dubya, as long as you think we should take you seriously; here is an article about movie projects proposed in support of your pet war in 2005 (with more of a jingoistic tone, I would say), and here is a link to movie projects proposed somewhat for the same reason as of a few days ago which seem to reflect, more than anything, our country’s discouragement over this whole sorry episode in our history.

At least “the dream factory” recognizes what the public wants based on their understanding of this calamity, and on that score, they’ve been waay ahead of any politician, especially you.
Posted by doomsy at 12:34 PM